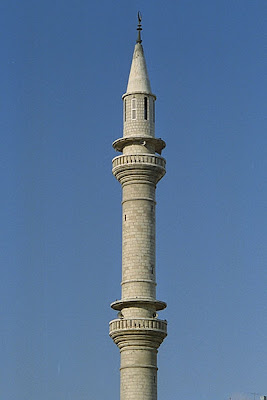 A minaret. The Swiss voted to forbid further construction of them.

Be it known, by the way, that thousands of mosques in the Islamic World do NOT have minarets, so, obviously, minarets are NOT necessary to build onto mosques.

Tawfik Hamid discusses. (Hamid is a reformist Muslim, himself reformed from having been our enemy, an Islamic supremacist, actually once an associate of Al Qaeda Number Two, Ayman al-Zawahiri, so Hamid knows the scary, deadly-dangerous truth about Supremacist Islam, having been there himself).

And he cites the inconvenient truth about contemporary Islam and about many Muslims, such truth being politically incorrect and seemingly unknown by the political-correctness-obsessed, submitting-to-all-Muslims, lazy-minded "progressive" community.

A must-read, particularly if you've been buying into the Big Lie that Islam is a "religion of peace" and means no one any harm, except in self-defence (self-defence can happen, but so does first-strike aggression in service of the goal of Islamizing the whole world, such aggression having historically led to the Crusades, in which Christians had had enough of the centuries' worth of Islamic attacks, invasions and slaughters and decided to fight back, taking the war all the way to the Islamic World. Hmm. Looks like history is repeating itself these days. Not our fault, as those Islamic Supremacists today are little different essentially from those who inspired the Crusades).

A couple of his points (read 'em all, of course):

Can Muslims blame the Swiss people for being afraid of Islamization in their country? No, especially while the entire world sees the inhumane applications of Islamic law wherever it is implemented? It should not be unexpected that the Swiss people would not want a system that even today practices discrimination against women, gays, and minorities in the name of religion.

The vivid images of stoning women and hanging gays in the Muslim world should make any sane individual inclined not to allow such an intolerant system to grow anywhere under the banner of freedom of religion.

The Swiss people who rejected building minarets may be sending a message that their tolerance did not change the Muslim world. For several decades, Muslims have been allowed to build mosques in Europe, wear their religious symbols such as the hijab, and preach Islam to non-Muslims.

Despite such high levels of tolerance toward Muslims in the West, non-Muslims are not permitted to practice similar rights in several parts of the Muslim world. Preaching Christianity is criminalized in a number of Muslim countries.

Furthermore, non-Muslims are not permitted to have their holy books or to build their religious temples is many shariah controlled areas. This lack of reciprocity of the Western tolerance will naturally make many Westerners feel that showing tolerance to Muslims is not effective.

In other words, we've been nice to Muslims, extraordinarily nice. Yet most Muslims haven't returned the favor in the spirit of humanity, equality and tolerance, instead continuing to be supremacists and spread their dangerous, deadly supremacist ideology worldwide, including right here at home. So why the hell would we continue to bow before them as if we were Obama bowing before the evil Saudi King? The Saudi King didn't return the bow, as we well know, symbolic of his supremacist ideology.

I guess Mr. Hamid must be an "Islamophobe", to say the stuff he says. When Infidels say the very same truths, they are so labelled. Hell, sometimes they get unconstitutionally jackbooted by crooked, bigoted, screw-brained "Human Rights" Commissions...

No tolerance for intolerance. No apology for being free.

Of course we should be afraid! Very afraid!

Besides, those who think it's unfair to ban minarets must look into the mirror and ask themselves, "Isn't it also unfair to persecute JudeoChristians in the made-up name of "separation of church and state", which is a myth and not in the US, nor the Canadian Constitutions?".

"Progressives" have their work cut out for them, with respect to becoming enlightened as to reality as it is, not as they've been told by politically correct propagandists. It's time for "progressives" to begin to learn to use their brains, to think for themselves, to come to understand the real world. In fact, it's time to abandon the foolish ideology of "progressivism", which isn't progressive at all, but actually regressive and destructive.

The Islamic World doesn't tolerate non-Muslims. Why should we necessarily tolerate Islamic supremacists and imperialists who seek only to Islamize our nations? It doesn't create any goodwill on the part of the supremacists, so why continue? To continue to bend over backward to these violence-prone haters is insane and suicidal.

It's time to take a stand. It's time to say NO to Islamization and absolutely require assimilation into our cultures. If Islamic supremacists and imperialists have a problem with this, they can either shut up and submit to our laws and culture like everybody else has to... or go home. We're not forcing them to come here and live, after all. They do so of their own volition. And how dare they presume to impose upon us? Like hell we need to tolerate such imposition.
Posted by Canadian Sentinel at 5:14 PM