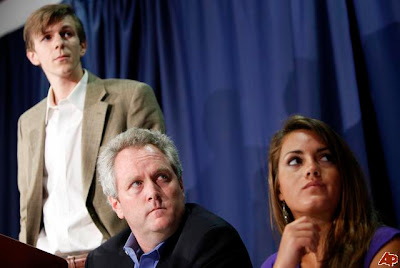 Andrew Breitbart, center, with James O'Keefe and Hannah Giles, the civilian undercover sting operators who exposed the big left-wing activist organization ACORN's corruption and shocking criminal mentality, in a news conference about their exposing the scandal, which the Big Old Media refuses to talk about.

The ACORN scandal was only the beginning. No doubt, there's been subsequent scandals, and will be many, many, MANY more... and Andrew Breitbart will tell us about them, unlike the Big Old Media!

He's going to be exposing the Left, the Liberals, the "Progressives", the whole movement of those who are destroying the Free World, particularly in America, and who seek to usher in a scary new era of command and control over our lives.

Breitbart feels that “if these traditional media outlets can’t be shamed into telling the truth, diverted for doing the wrong story, for simply running defense for one party, and mocked away from creating journalistic rules that only hold those on the right accountable, then it puts us in a position to do more than we’ve done in the past with talk radio and web aggregation. The market is wide open to go on the offensive, to tell truths that aren’t being told. The center-right alternative media has been playing a passable prevent defense, constantly saying ‘that’s not right’ for consistently biased reporting. Now we aim to offer more aggressive journalism and to give the mainstream media a little dose of its own medicine.”

This guy Breitbart understands these things. A LOT.

Pretty soon the Obamacrat Attack Machine will train its crosshairs onto Andrew Breitbart and attempt to destroy him for daring... to... speak... the... inconvenient... truth... about them.

Many don't see it coming, but this Breitbart guy is going to be BIG, and soon.

The Old Media and the Obamacrats can't afford to ignore him. Expect them to attempt to demonize him with their own lies. Just like they've been, and continue to do, to Sarah Palin, their greatest electoral threat.

THIS IS THE "NEWS". FROM NOW ON!
Posted by Canadian Sentinel at 6:21 AM