If the People don't speak, then the stones will.   -The Angel 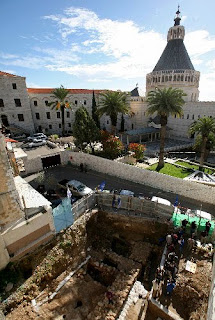 Where He lived.
Posted by Canadian Sentinel at 2:14 PM

The Angels were correct.

This is great news. The Son of God walked among us and still some have difficulty in accepting the facts- they are 'doubting' Thomases.

Also inconvenient to the Israel-haters is this indubitable proof that Jews have always lived in Israel... ALWAYS. And have ALWAYS been attacked and invaded. Then by the Romans, now by the Muslims in so-called "Palestine", and by the World.

And the Jews get blamed for the attacks and invasions against themselves, and get blamed for Hamas putting civilians into harm's way, sacrificing them so as to demonize the other guys for something for which the other guys are not responsible, nor guilty, because it's ALL Hamas's fault, the setup for probable death of civilians, something Israel never does.

The PLO propagandists must be back at the drawing board as we speak, coming up with some lie or another, to try to neutralize this discovery's broad meaning.

To nonthinking folks, it's too overwhelming, all the evidence, for their brains to handle... until they bother to build their brain power so as to be able to understand it all. Until then, nonthinking folks will believe what the Big Old Media tells them, which is lie after lie after Big Lie.

Until then, nonthinking folks will believe what the Big Old Media tells them, which is lie after lie after Big Lie.

Until the day we put an end to it.

The Afghans after decades under strict taliban rules lived in silence but now under a new rule, the Afghans have new media, radio show hosted by women.
Yet in canada we live under the same rule of the NATIONAL MEDIA's manipulation, lies, insults hate disrespect(a taliban style media) and unlike the Afghans and their new media, canadians remain in the dark.
We have a choice.

There are reporters out there who are very good and credible but are rarely heard. They need to come forward fast. Whispering behind close doors or seeing their written article be place in the back page is not to be allowed anymore.