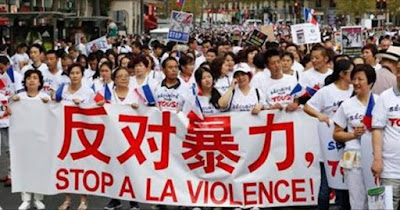 ...and the Media dutifully refuses to ID the racist attackers as Muslims.

This harassment of the Chinese near Paris has been going on for a long time. It got so bad that at one point the Chinese ambassador to France was forced to pay a visit to Aubervilliers to try to calm his countrymen down. And in 2013, the Socialist mayor of Aubervilliers, Jacques Salvator, suggested that the violence against them could be halted if Chinese companies would agree to hire more Arabs and Africans. The Chinese were not assuaged, countering that “Muslims do not work as hard as the Chinese, that they are more demanding, and that they complain too much.”Anyone familiar with Muslim work habits would need no convincing.


Since that demonstration in Aubervilliers two weeks ago, apparently little has been done to placate the Chinese. They described to reporters covering their demonstration in Paris their feeling of frustration at not being listened to by the French authorities who, they said, fail to realize what kind of daily terror they endure. And in addition to the attacks on Chinese who live in the suburbs, there has been a steady increase in the number of attacks targeting Chinese (and Korean, and Japanese) tourists in central Paris. These Asian tourists are known both to buy luxury goods to take home with them, and to carry lots of cash. Just the other day, a gang of six (unidentified men) jumped onto a bus just about to leave a hotel for the airport, and made off with luxury-filled luggage belonging to the 27 Chinese tourists on board. The attackers in Aubervilliers have been identified as Muslims, but in the stories about attacks on Chinese tourists the criminals are not identified. But reading between the lines suggests that those attacking the tourists, like those known to be attacking the Chinese in Aubervilliers, are Muslims, and for a simple reason: had any of these criminals been French, the press, which tends to protect Muslims, would certainly have been eager to describe them as such. A refusal to identify them, in the current climate, almost certainly means they were Muslims.