Cadillac division of General Motors, which is obviously taking a lot of direction from the Obama administration which redistributed the taxpayers' wealth to it, is paying for the production of a propaganda film in favor of the Chinese Communist Party!

It's titled "Birth of a Party".

Hmm.  I wonder if General Motors also paid for the production of the Nazi propaganda film "Triumph of the Will"...
Posted by Canadian Sentinel at 7:07 PM 4 comments: 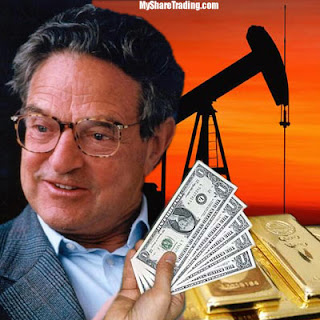 George Soros and other foreigners with money are interfering in Canada's sovereign business.

B.C. aboriginal groups opposed to the Northern Gateway pipeline proposal have received almost $16 million in funding between 2008 and 2010 from Coast Opportunity Funds (COF), a group connected to foreign foundations that fund anti-oilsands projects.

Interveners, such as the Haida Nation, have been getting economic development assistance for aquaculture, tourism and other activities along with financing for conservation projects from COF.

But the money comes with strings attached.

Hmm.  Suspicious.  I immediately smelled the likes of George Soros.

George Soros used his money and Useful Idiots both in America and Canada to attempt to kill SUN TV News before it was born, I recall. 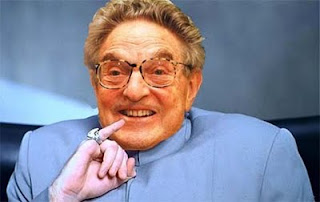 His money is also apparently screwing with our sovereign energy business by using Aboriginals as Useful Idiots.  Money usually gets the average person to do stuff...

COF gets its money from a wide variety of sources, including government, corporate and various foreign foundations... including Tides Canada Foundation, which is linked to the Soros-backed Tides Foundation.

Therefore, I'm comfortable with Conservative Prime Minister Stephen Harper's fight against the pushers of dishonest, environmental-extremist propaganda and intimidation.  The Useful Idiots, whoever they are, are being USED by FOREIGN RICH FOLKS who have financial interests in seeing Canada not develop into an energy superpower (same as their interest in preventing America from further developing its oil and gas industries).

It's all part of the global warming/climate change swindle, from which billionaires and millionaires like George Soros and Al Gore are massively profiting.  High energy prices are the way they do it, and the way to make these prices high is largely to strangle the supply as demand continues to rise.

Foreign, selfish, interference-and-sabotage-intent money-worshippers ought to F.O. and leave Canada's sovereign business alone.  They should mind their OWN business and stop bribing identifiable groups to act as political-correctness-protected Useful Idiot propaganda bullies to militate against Canada's economic interests.

Of course, if we say anything, they'll probably just holler "raaaaacist!" or something...
Posted by Canadian Sentinel at 5:21 AM 8 comments: 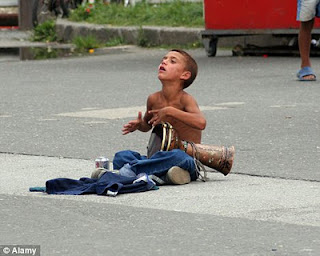 Ultimately, once a nation runs out of other peoples' money, it becomes unable to do what it promised to do:  Take care of its people.

See, socialism does NOT work in the long run.

Children are being abandoned on Greece's streets by their poverty-stricken families who cannot afford to look after them any more.

Youngsters are being dumped by their parents who are struggling to make ends meet in what is fast becoming the most tragic human consequence of the Euro crisis.

If a government doesn't have the balls to tell the socialists, unionists and "protestors" to shut up and behave or face personally devastating consequences, then the nation will collapse and the most vulnerable will inevitably suffer. 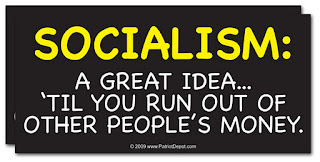 Posted by Canadian Sentinel at 5:09 AM 6 comments:

Pedobear ought to be Greece's national animal now.

The Ultra-Far Left-Wing continues to screw up the Free World with advancing immorality and with bizarre laws protecting such immorality.

Plus, to add insult to injury, perverts like that will receive socialism payments higher than those received by folks with REAL disabilities!

I've been warning of this.

Plus... apparently the folks in charge of running Greece have decided to run her into the ground by giving scarce money to pedophiles just for being pedophiles.

At the same time, REAL disabled folks have been negatively impacted by "austerity" measures.

Yeah, it's real smart to take money from the deaf and give it to the morally depraved. 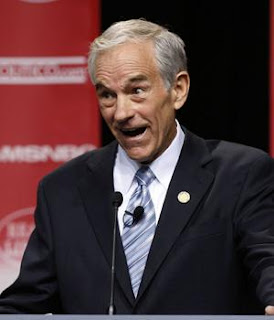 See, he doesn't know what he's talking about when the topic turns to Islamic supremacism, Islamic terror, Iran, etc...

Definitely read the whole thing and find out where he gets his crazy ideas on foreign policy.

From a guy closely tied to Islamic supremacists!!!

But I fully expect hardcore, determined Ron Paul adherents to not give a shit.

They want to save a trillion-plus dollars on the cost of government. They want to get rid of whole useless agencies like the EPA and NEA.

Those are good ideas.

But I have a problem with the fact that they don't give a freakin' shiite about Ron Paul's dangerous lunacy and brainlessness on matters of national security and defence and global threats.  I can't believe otherwise rational folks are seeing Ron Paul as some kind of guru on these matters.  WTF?!

Ron Paul is UNBALANCED, period.  That's not a good quality in a potential president.

I don't trust Ron Paul.  I cannot.  I fear that he's actually a puppet, a Trojan Horse.  No, I don't have proof... it's just a legitimate fear based on logic and reason.

Those who want to vote for Ron Paul for a few good reasons whilst ignoring the dangerous stupidity and ignorance of the man... go ahead.  But you will be held responsible should he become President and prove to be a latter-day, American Neville "Peace in Our Time" Chamberlain.

It's a serious risk that I will not take.  Not that I can vote in that dogfight anyway.

Oh, and if the guy below, known as "Vermin Supreme", said he'd end the Fed and save a trillion bucks, and wore a suit and canned the funny-ass antics, would the Paulbots become 'bots for HIM, despite his other weird-ass ideas? 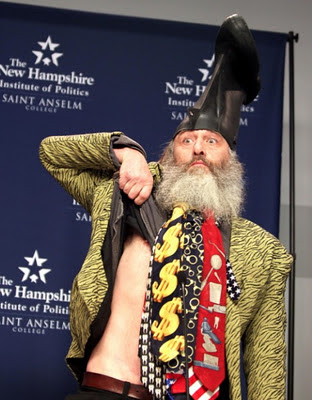 Posted by Canadian Sentinel at 6:06 AM 2 comments: