Really. The Dems and the GOP do suck these days, so The People are looking to an alternative that represents them and represents America.

According to the new NBC/Wall Street Journal poll released Wednesday, 41 percent of likely voters now have a favorable opinion of the Tea Party Patriots. That compares to a 35 percent favorable rating for Democrats and 28 percent for the GOP.

The stunning conclusion: If the Tea Party Patriots were a political party – it is increasingly shifting its emphasis in a nonpartisan political direction – it would be the most popular party in America.

It also indicates that the left-wing bloggers and talk hosts who have consistently derided the Tea Party Patriots throughout the year with an obscene “tea bagger” reference are out of step with the American people.

Who's the mainstream, really? Hmm? The Leftists? Yeah, right. Suuuure. Not falling for that big lie anymore!

By the way, the following picture shows us what a "teabagger" really is. Yep, that's one of those machines that puts the tea into the little gauze bags. So it's pretty dumb to refer to folks as if they were a teabag machine. Of course, Leftists are dumb, so... 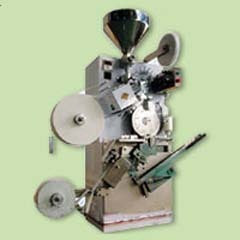 Posted by Canadian Sentinel at 9:41 PM