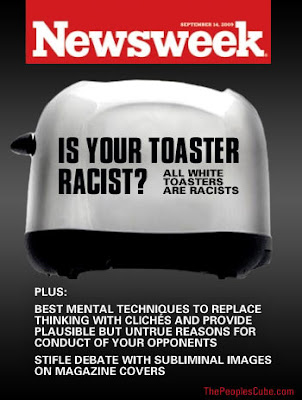 Get ready for crap such as the above.

Bumped to top. Newer ones below.

The Big Old Media (AKA The Obamacrat Propaganda Attack Machine) steadfastly refused to acknowledge all the unmissable, undeniable signs that pointed to Barack Obama's very probable racist mentality. They refused to believe that either any single sign or even a massive preponderance of signs that Obama may well be a racist... were worth considering at all.

They shielded Obama from the inconvenient truth, no matter how incredibly damning.

But they're hard at work trying to find anything at all that could, by lazy-minded "progressives", somehow be considered as "evidence that Obama's reputed nubmer one political opponent is racist".

Yes, they're doing their job, which is obviously now to destroy Sarah Palin with Big Lies and Innuendoes Repeated Over and Over and Over.

Ah... one of the usual suspects... yep, the New York Times, basically the Pravda of the Obamacrat Propaganda Machine, is already trying to use something some guy wrote that somebody else said to try to make Palin look like some kind of racist monster (but they'll dismiss and condemn anyone for pointing out the racist stuff Obama's actually proven to have said, the scary racists with whom he's infamously associated and the awful racists he's appointed all over the Reich!):

Tanenhaus cites the new book, “Sarah From Alaska,” co-authored by Scott Conroy, who covered Palin's campaign last year for CBS News, and Shushannah Walshe, who covered it for Fox News. “Palin’s father, Chuck Heath,” Tanenhaus writes, told Conroy and Walshe that Palin left college in Hawaii after only a single semester because “the presence of so many Asians and Pacific Islanders made her uncomfortable.”

That reminds me. Obama's grandmother said he was born in Kenya, and that she personally witnessed the actual birth right there in Kenya. But the Obamacrat Propaganda Machine refuses to acknowledge this at all, despite the reality that it contradicts Obama's claim that he's eligible to be President because he was born in America!

Anyway, so what if Palin's pa actually said that? One must analyze the statement. Sarah herself didn't say that, nor did her pa say she said it. That's just her pa's own opinion, as if it meant anything more to the Obamacrat Propagandists than does Gramma Bamma's positive declaration that Barack was born in Kenya!

Besides, Obama's known to have said, himself, far worse about folks who look different from him, etc., and the Obamite Big Old Media cover it all up and never mention it, ever.

Oh, boy, does the NYT guy ever extrapolate! Funny, but if we extrapolate on Obama's stuff, we're called "crackpots", "conspiracy theorists" and, yes, "racists". Sheesh!

Extrapolating further, Tanenhaus asserts that “Race is often the subtext of populist campaigns; their most potent appeal is to whites who are feeling under siege by changing economic and cultural conditions. Palin’s strength with this constituency can only have grown since the last election.”

Hey, that's exactly what the picture of the Newsweek parody was talking about! "Replace thinking with cliches... Provide plausible but untrue reasons... your opponents". Guy's just spittling the bullshit as he says such nonsense. It's even dribbling down his chin and spotting his shirt.

Of course, he's full of it. After all, you know, those "white folks" have already voted for Obama, right? They're only turning away from him to Palin now because he's proven himself to be the worst President America's ever had. If it had been the other way around, then they'd be turning from Palin to Obama, so it's illogical to say they're "racists". But the NYT guy is a leftist, so logic isn't something that happens inside his head.

Just listen to this guy. He desperately wants to justify calling Sarah Palin the "r" word. I wonder what he'd say if confronted with the mountain range of evidence pointing to Obama's very likely racist mentality? Probably call us "racists" for daring to "smear" Obama with "lies", even though he knows it's actually the truth! Typical ultra-extreme-hard-left-wing extremist demagogue!

Well, you've got to read the whole thing to see for yourself how hellbent those Obamite Propaganda Attack Mongrels are with the whole "let's all call her a racist!" thing.

The Crackpot Hard-Left Blogosphere is already running across the field bareassed with that crap. Typical. Of course, left-wing blogs have zero credibility as, after all, they're left-wing.

I see Chris Matthews of MSNBC is on the bandwagon too.

Those double-standard-practitioning hypocrites! They feign shock and horror when anyone accuses Obama of racism, even given all the inconvient truths pointing to it, yet they'll turn around and participate in a widespread smear campaign against Obama's perceived chief opponent for the Presidency.

The Obamacrat Attack Machine is gearing up.

It's going to be a brutal, horrific Big Lie campaign the likes of which Reich Minister of Propaganda Josef Goebbels would marvel at.

And, no doubt, it'll be well-funded with millions of dollars traceable to the pockets of ex-Nazi collaborator (and proud of it, actually) George Soros, widely believed to be Obama's Puppetmaster.

By the way, one can't help but note that right now Obama's and Palin's popularity levels are now crossing. This must unnerve Obama, who obviously can't understand why people aren't still worshipping him at his every word and move as they once did.

Oh, and here's another example of what to expect from the Obamacrat Attack Machine: 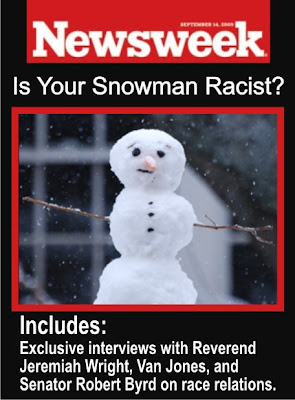 Those folks mentioned under the snowman? All racists. And all associated with Obama. The last one, in fact, is a former KKKer who, until only a tiny while ago (health reasons), sat as a Democrat in the Senate!

Do you feel you have any lessons to take from actual racists?
Who would they be to be accusing you of racism?
Hypocrites. The Pot calling the Kettle...
Posted by Canadian Sentinel at 5:00 PM