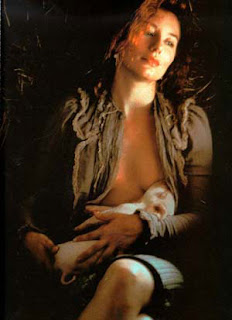 
Would you believe that she actually believes she knows more about MidEast politics than does Sarah Palin?


Like, how would she know?  She didn't say how.
Dismissed.


Promises to run as a Republican if Palin runs again.

That someone like this would think about being a Republican is a slap to the faces of Republicans who falsely claim to be conservative.  Now they're so "moderate" that even nutty lefties want to be Republicans, too.

After all, anyone who thinks that Obama is better than Bush (she didn't say why, how, etc... didn't back up her claim)...

So she says Palin "isn't qualified" for the job.  Well, hey, lady, what makes Obama qualified???

Dismissed.  With a laugh.

Get a brain, honey.  Then come back and see me.  But only then, please.  Got important stuff going on... too busy to deal with ditzy-bimbo lunatics.
Posted by Canadian Sentinel at 7:42 PM

You don't back up any of your viewpoints either. Just sayin'.

How does one back up a viewpoint about a woman breastfeeding a pig. Just sayin'.