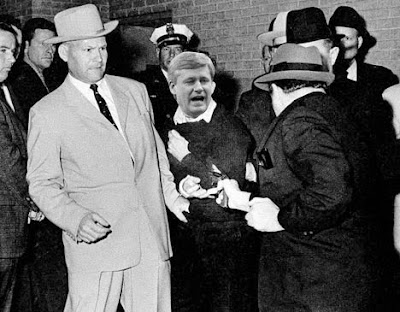 The offending photo the Liberals posted on their website

Imagine the uproar if they had posted an Obama assassination pic. It'd surely be far bigger.

So this is the Liberals' strategy. Saul Alinsky Squared. Since they've got nothing else to go on, they'll do what the Putinist Russians have been doing.

Their gloves are off. They're on PCP.

And the weird thing is that this is happening in the Post-Warren-Kinsella Liberal Party, with Chretien-era operative Peter Donolo now in charge.

The Globe and Mail weighs in on Liberal Leader Ignatieff's hypocrisy.

This is the sort of thing that shows Canadians that the Liberal Party is full of extremists.

And these extremists are childish and unsophisticated.

They resort to PhotoShopping instead of facts, reason and logic.

And we now know what goes on inside their heads.

UPDATE: Surprise! CTV reports on the scandal. Other outlets mention it as well.

"We won't dignify this with a response," said Harper spokesman Dimitri Soudas.

Soudas said Liberal Leader Michael Ignatieff "should comment, not us, as the incident reflects on Mr. Ignatieff's judgment."

Even the CBC reports.

Posted by Canadian Sentinel at 5:04 PM