MSNBC's Matthews: Rad Commie Saul Alinsky One Of His Heroes 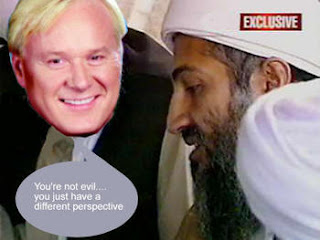 Doesn't surprise me in the least.

The only surprise is that Matthews had a brainfart and exposed himself as a hard-leftwing ideologue, a useful idiot, a fellow traveller, a neo-communist.  It's a surprise because Leftists aren't supposed to self-expose as Hard-Left Neo-Communists.


Well, to reach back to one of our heroes from the past, from the `60s, Saul Alinsky once said that even though both sides have flaws in their arguments and you can always find something nuanced about your own side you don`t like and it`s never perfect, you have to act in the end like there`s simple black and white clarity between your side and the other side or you don`t get anything done. I always try to remind myself of Saul Alinsky when I get confused.


Ah.  He makes stuff up (acting like there's b/w clarity between your and the other side).  Typical of members of the Hard Left.   In other words, they'll tell themselves something that isn't true, but that makes them feel confident about their position, however wrong or bad, so as to pretend they haven't lost an argument.  And this not-losing is frequently used as an excuse by Leftists to push their wrongheaded agendas/policies.

Guy's a Hard-Left ideologue. Like so many in the Big Old Media.

Kind of a gift, Mr. Matthews's candidness.  Now we can say with confdence that he says some of the stuff that he does... in service of The Agenda.  How?  He's cut from the same Hard-Left ideological cloth and is drinking from the same koolaid fountain as is His Glory The Obamighty.

And... just watch his career in the Big Old Media continue as is.  He won't be forced out, nor will he feel he needs to leave in order to tell it as he wants to tell it.  After all, like him, the Big Old Media is neo-commie, Alinskyist, Obamite, etc...