Why No Anti-War/Anti-Obama Protests By Hard Left?

There's none of this hate-the-President, hard-left protesting anymore, despite the fact that nothing has changed except who's living in the White House. The same wars are still going on, with both Muslims and Americans being killed.

Obama's a warmonger, an international terrorist and equals Hitler at least as much as did Bush.

But no escaped-from-the-lunatic-asylum protests like... this (WARNING: Absolutely NOT safe for work. Will disgust and possibly cause at least slight vomiting)!

You see, those obviously seriously psychologically-disturbed protestors weren't there because they decided on their own to go.

Oh, no. They were ORGANIZED by the community organizers on Obama's side.

Now that it's Obama, not Bush, who's waging wars all over the world and killing people all the time, there are no longer any anti-war/anti-President protests because Obama's people are NOT going to organize them against Obama.

It's as simple as that.

Instead of those sick, extremely unattractive freaks we saw protesting against Bush, we now see ordinary Americans, all with their clothes on, of course, independently organizing themselves together to demonstrate their opposition to the Obamacrat Reich and its destructive policies and practices.

That's the difference, folks. The anti-Bush protestors were pure Astroturf whereas the Tea Party folks are pure grassroots Americans of all political stripes.

And if anyone's likely to be "teabagging", it's the folks at the link I provided with the strong warning. I mean, for gosh sakes, if you do dare to check out those deranged lunatics uttering the most assinine things about Bush, you'll notice that THEY are the REAL "teabaggers", showing the world their, um, "teabags" (and this applies to both the men and women) sagging, dangling and drooping.

Want so see more deranged, hard-left lunatics in action? Go to Zombietime. You just might, if you're already left-leaning, decide to leave the left once you've seen the shocking truth about the hard left.

Odd also how the Big Old Media never told us that so many of those anti-Bush protestors are apparently psychologically and intellectually damaged. 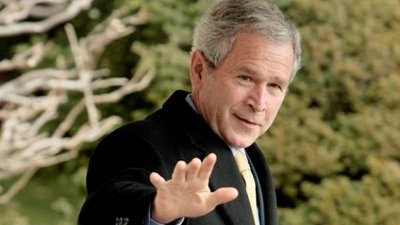 Ah, but Dubya, while nearly half of Americans want you back and Obama gone, you're still not as popular as Sarah Palin, who's now neck-and-neck in the polls with Bamma. And gaining rapidly.

The problem with the Obamacrats is that they're deliberately doing the absolute worst job as a government in America... ever. What, therefore, is to be expected, when you've got a new regime that's about a hundred times worse than its predecessor?
Posted by Canadian Sentinel at 9:43 PM