What a dangerous idiot currently residing in the White House!

Now there's another Democrat in the White House saying he doesn't give a flying frig about the guy who tried to blow up an American airliner on Christmas.

Calls the guy an "isolated extremist".

Based on what evidence?  Actually, we've got candid testimony from the perp is that he's Al Qaeda, plus Al Qaeda Yemen indicates their responsibility for the act.

And Al Qaeda Yemen is connected to  the Fort Hood terrorist.

Speaking of which, well, how about telling us what the Ft. Hood investigation turned up?  Why the hell are the Obamacrats sitting on the information?  Who are they protecting?  What are they hiding?  Sheesh!  One would think it was Obama's REAL birth certificate, which he's sitting on, too!  Obama just loves treating Americans like mushrooms, doesn't he?  Y'know, keeping y'all in the dark and feeding y'all y'know what...

And the perp warns that he's only the first of many more to come.

Nothing good is going to come of this radical neocommunist wackjob's presidency.

History is repeating itself. 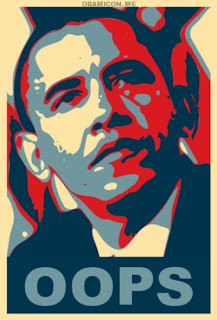 The sooner y'all throw the bums out, the better.  Impeach the Big Ass, ASAP!

"Climate change"?  Are they kidding us?  Lookit... there's terrorists telling us they're going to be bringing catastrophe upon us, and the Obamacrats don't give a gosh darn!

Blowing our money on a Big Myth will render us unable to protect the Free World from the Axis of Evil!

I don't remember you being this mad at Bush, the standing president at the time, after 9/11. Is that because it was a Democrats fault?

Well, Bush hadn't been in office for long when it happened. Just a few months.

Clinton had been in for two terms. We're talking eight years.

Wasted his time blowing around with Monica, instead of giving the go-ahead to blow away bin Laden.

What did Clinton do in response to the first WTC attack? Very, very little. No wonder it happened again!

So what is the time length one has to be in office before it becomes their fault. Just for future reference and all.

Hmm... lessee... anywhere between one second and eight years.

Depending on what they actually do or don't do, of course. What's that? Well, just use your noodle!

S0 since Bush was president during 9/11 and had been so for several months and since he had got a report on a potential attack and failed to do anything, he is, in your opinion, responsible for 9/11 just like Obama is responsible for the attempted attack the other day?

So you fancy yourself a Truther, huh?

I don't believe Peter is a Truther.
But he is just asking why Bush and Obama are treated differently by you with respect to the incidents. Neither orchestrated the attacks.

Nobody said either "orchestrated" the attacks, Canuckguy.

Truthers believe an evil cabal within the Republican administration orchestrated the collapse of the towers and engaged in a coverup. That would be a superhuman amazing feat if true but it is so patently ridiculous. Such a feat would require an amazing competency that only exists in outlandish movie plots.

You blame Obama for the failure of the security system in the attempted plane bombing. The system is imperfect, much of it set up under Bush. Obama is not a magician, he can't micro manage individuals, the ones who fail. He can provide long term direction for the big picture and make sure the resources are there but no human designed system is perfect. Slip ups will happen. You can't personally blame him. At least not at this point in time.

No, I am most definitely not a truther - I am just pointing out the inconsistency here, as Canuckguy points out. Obama is at fault for allowing the latest attack, but somehow 9/11 was not the responsibility of Bush (and by responsibility I don't mean that he was involved in the plot, but that his government missed the signs). And as Canuckguy points out, this system is the one Bush had 8 years to set up. So why doesn't he get the blame now?

Why can't you just admit that you are a partisan and that in your eyes, Conservatives can do no wrong - ever. It's always a liberals fault.

Obama emerges squeaky clean. Of course. He, after all, is perfect. Can do no wrong. Has only the purest of intentions. Has no bad agenda at all. Wow- what a wonderful president! He's sooooo great! No need to worry, folks... he's on toppa it all!

You guys can worship His Greatness all you want. You can cheer him as he presides over the downfall of America and the Free World all you want. Knock yerselves out, eh!

Not at all, Sentinel, I don't worship Obama but I am prepared to reserve judgement on him. And I do admit, I am a bit disappointed in him thus far but really, he has made only a few mis-steps.

Oh, crap... you've been drinking the Bunker Koolaid. Obviously Balbulican's secret recipe, to which others have succumbed and to which you too will, unless you escape soon...

Got to admit I'm a bit disappointed in you, the way you "reserve judgement" because you can't read between the lines of everything that's going on with Obama and his 'Crats.

But that's ok. Not everyone can do that. Maybe you'll learn, though. I know you've got it in you... but you still must try harder!

Well CS, nothing like talking down to people and making yourself feel superior - we call that smugness in the real world. And I thought liberals were the smug one's - read our last paragraph to Canuckguy and tell me that isn't smugness at its finest.

As for Obama - neither Canuckguy or I has said that he is perfect or beyond reproach (and if you can point out the exact sentence where we said that, that would be great). All we are saying is that there is an inconsistency in your logic - Obama is to blame for this incident, but in your eyes, Bush bears no responsibility for having 9/11 happen on his watch.

I think the whole system is broken, Obama or Bush. But that's just me. You are the one who harps about seeing the world as it is, going so far as to talk down to those who dare disagree with you, yet your worldview seems to have glaring inconsistencies.

nothing like talking down to people and making yourself feel superior

-Just like Obama does a lot... to American citizens who disagree with him. What a great guy, eh? So why's it wrong for me to do it, then?

If Bush bears any responsibility for 9/11, then there should be proof. What proof is this? Specifically what did he personally know? Did he know about the specific individuals who hijacked the planes? And then did he say "let 'em fly"? Hmm?

Obama's regime clearly forbids any semblance of "profiling", therefore the would-be mass murderer/undie bomber was allowed to fly, no matter what.

How was Bush responsible? Did he bring in policies forbidding profiling of would-be terrorists?

Sentinel, what I (and I believe Peter) are saying is that Obama is no more to blame for the plane incident than Bush is for 9/11.

Just like Obama does a lot... to American citizens who disagree with him. What a great guy, eh? So why's it wrong for me to do it, then?

It's wrong when anyone does it. You seem to take the stance that you can undertake actions that you claim to hate in your political opponents - it makes no sense. If you hate something they do, then why would you engage in the same behaviour? What lesson are you teaching?

Well it is widely known that Bush's government had advance notice of terrorists flying planes into buildings. Richard Clarke's first book can fill in the rest. And given the results of the two incidents, one would think that since Bush was the standing President during the worst terrorist attack in American history and given your stance here that a President is responsible for attacks under their watch, that you would be more critical of him rather than his biggest cheerleader.

Truth is, if Bush was a Democrat and had been on watch during 9/1 you would want him tried for treason - but since he was a Republican, you don't care. Truth is, you don't care at all about any of this - you just want to see your side win and will say and do anything to see that this happens.

So some guy wrote a book.

I'd recommend "Muslim Mafia" to you. It'll open your stubborn mind about Islam a little more.

Have you read "The Marketing of Evil" yet? That's a mind-opener, if ever there was one!

How about "The Kinsey Corruption" about the fraudulent "sex expert"? After reading that, you'll loathe that horrible sadistic monster for what he's done and the big lies for which he's responsible.

How about "The Pink Swastika" that exposes Hitler's and other Nazis' homosexuality?

As for Richard Clarke, might as well read the following from Front Page, who questions Clarke, a fmr. Clinton (Democratic) Admin. official.

This quotation I'd highlight:

For these people to criticize the Bush administration's efforts to protect Americans against terrorism, long after their own ineptitute had allowed al Qaeda to grow bold and powerful, is contemptible.

Of these Clintonite critics, the most important appears to be Richard Clarke. Clarke has written a book called Against All Enemies which will appear tomorrow--coincidentally, just in time for the 2004 election campaign. Clarke is being interviewed on 60 Minutes as I write this--a cozy corporate tie-in, as Viacom owns both CBS and the publisher of Clarke's book.

The evidence that the Obamacrats knew about the Nigerian terrorist is indubitable. And it's also indubitable that they apparently did nothing.

To blame underlings, Obama is trying to escape personal responsibility for failing to order that national security and fighting Islamic supremacism would be a number-one priority.

When one has so much evidence (as I do, from closely watching this regime for a year, posting the damning stuff as I found it), one can tell that the Obamacrats don't care worth shit about America's national security, nor about the Islamic supremacism that's the root cause of terrorism.

That "The Bush Admin knew for months" and a few months later 9/11 happened... is weak.

The Clintonites did nothing to combat Al Qaeda in the years they were in power. Now they're mad that Bush didn't prevent something for which he didn't have SPECIFIC information?

There wasn't specific information about the actual terrorists and the flights and targets they were going to use, was there?

If the info was that specific, then Bush can certainly be faulted for doing nothing.

So was the info that specific?

I suspect that it wasn't, for if it was, the Big Old Media would've certainly shown us the proof already!