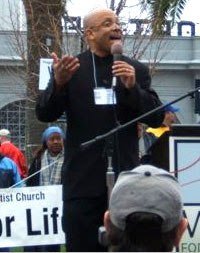 Why does Obama, who's black, want to slaughter black babies?

And why does he want to force Americans to pay for this genocide?

After all, this is what Obamacare is about, and the Obamacrats are insistent that any health reform bill include a law forcing Americans to pay for abortions.

What the Big Old Media won't tell us is that it's also an agenda to reduce or at least prevent growth in, the Black American population.

I guess the Big Old Media is therefore part of the conspiracy to commit genocide in America.

He estimated16 million African-American babies have been aborted since the passage of Wade v. Roe in 1973.

Had the approximately 16 million African American babies aborted since the landmark Supreme Court decision been allowed to live, there likely would be more than 50 million African-Americans in the U.S. today. The last count, in 2007, was 40 million.

Hmm. That's a potential ten million more votes for Obama, if we're to believe polls that claim that nearly 100% of blacks vote Obamacrat. Oh, darn... if only there hadn't been a genocide movement, then Obama could be President for a second term, thanks to all those extra votes!

Clearly, the abortion-"rights" movement has succeeded in keeping the Black American population in check. This is evil, plain and simple. Who will the Wealthy Elite Few target next? Who will they wipe out "to save the planet"? We know it's no secret that they want to reduce the human popluation somehow. They've said so, written so. Their books about "population control" are still out there. Some of them are even Obama's extremist "czars", not that the Big Old Media will tell us about them.

How do they do it? In large part by locating most of the "Planned Parenthoods" (founded by the racist Nazi sympathizer, Margaret Sanger) in predominantly-black/minority neighborhoods.

I've reported on this before, more than once, linking to the documentary "Maafa 21", about the long-running anti-black genocide movement in America.

I believe it's easier to believe in the reality of the genocidal movement in America than it is to believe that we're destroying the world by simply exhaling.

Sometimes I also wonder if the mass promotion of homosexuality is part of the population control agenda. After all, homosexuals cannot reproduce, and only a few bother with reproductive technologies anyway, most preferring adoption, which doesn't expand the population. The eugeneticists may figure, well, if we can convince more and more people to opt for the gay lifestyle, then that will help reduce population growth. No wonder Obama appointed Kevin Jennings, the radically extremist homosexual propagandist, to be "Safe Schools Czar" and refuses to fire him despite the shocking reports that Mr. Jennings promotes such things as "fisting" to kids and condones telling first graders to have homosexual relations with one another.

It all fits together like a puzzle. It all seems to come down to population control. And what do they care if it's sometimes racially-motivated? The Wealthy Elite Few who are onside with all of this shit tend to be corrupt and evil anyway.

Hey, we've got genocides and holocausts going on all the time as we speak. Most of the time they go unreported by the Big Old Media. And the countries commiting the genocides usually get left alone. It's as if the Elites and the Big Old Media don't care. It's as if they want it to be happening, so that's why they look the other way. Weirdly, though, they, ironically, hypocritically bash tiny, human-rights-respecting-and-promoting Israel for its falsely alleged "genocide" against the "Palestinians". Imagine that!

They want to control the lives of everyone in the world via a global governing regime, to hell with national sovereignty, democracy, freedom, human rights...

All of this shit fits together in one big, evil puzzle. Of course, lazy-minded folks who pay little or no attention to what's happening in the world will not see what I'm talking about. Too bad they're out of touch with reality, like the world was whilst Hitler's Nazis plotted World War Two and the Final Solution.

Posted by Canadian Sentinel at 4:51 AM