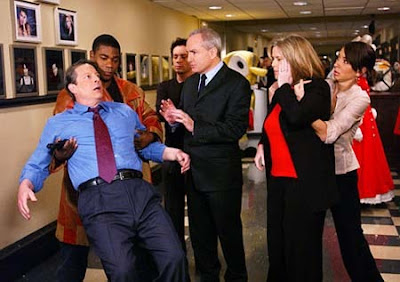 Olde scene: Al Gore on SNL. Perfect graphic to go with this post.
The shock of being caught publicly, making stuff up, and being unable to call his caller-out a liar is obviously stunning the Goreacle.
I'm surprised he didn't have an armed detail remove the dissenter who rebuked him.
Of course, that dissenter wasn't a skeptic, which makes the flub even more embarrassing for the Goreacle!

In his speech, Mr Gore told the conference: “These figures are fresh. Some of the models suggest to Dr [Wieslav] Maslowski that there is a 75 per cent chance that the entire north polar ice cap, during the summer months, could be completely ice-free within five to seven years.”

However, the climatologist whose work Mr Gore was relying upon dropped the former Vice-President in the water with an icy blast.

“It’s unclear to me how this figure was arrived at,” Dr Maslowski said. “I would never try to estimate likelihood at anything as exact as this.”

Mr Gore’s office later admitted that the 75 per cent figure was one used by Dr Maslowksi as a “ballpark figure” several years ago in a conversation with Mr Gore.

That in and of itself is priceless but isn't all that damning.

But this inconvenient truth is. It proves that the polar ice cap is strengthening, actually.

So we know, from our own observation of reality, that Al Gore and his ilk, including the so-called "scientists" who also want to scare the hell out of us, are simply fullashit.

And, no matter how hard the Chicken Littlist Alarmists try to scare us into uncontrollable fits of the Hershey squirts, fewer and fewer of us are believing the bullshit. Wonder why?
Posted by Canadian Sentinel at 10:56 PM