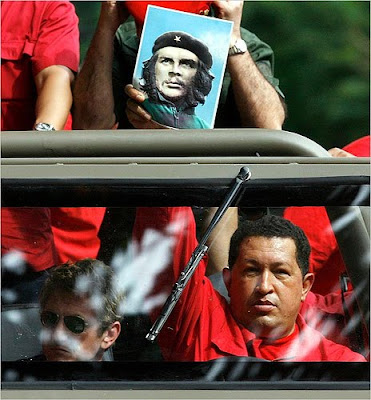 Above: Hugo Chavez, holding up a pic of the monstrous Communist butcher Ernesto "Che" Guevara. The little guy with the sunglasses? Oh, that's just Hollyweirdo Sean Penn, a man without a brain.

What else can we conclude when they applaud Hugo Chavez for fearmongering against capitalism, bashing America and even bashing Comrade Obama, who's doing everything he can to please these feckingasshole neocommunists by being one himself by imposing national socialism onto Americans against their will?

Robert Mugabe, the horrible "African Hitler", chimed in to bash the Free World, too. Oh, how lovely. Like Hitler, he's got a scapegoat to blame for the problems of his country, which are his own damn fault!

Suddenly it's no longer about saving the planet, but rather about destroying capitalism (and freedom, democracy, the rule of law and human rights, none of which are compatible with the kind of neocommunism represented by Hugo Chavez).

See? It's clear that the whole gw/cc thing is nothing but an international neocommunist plot to extort incredible, unprecedented amounts of money from the Free World. No doubt most of it will just personally enrich those onside with neocommunism, plus be poured into the Non-Free World's militaries so as to make them a greater threat to the Free World.

That apparent unmasking didn't, however, stop the Free World from handing over $22 billion to "wage war on global warming/climate change".

Clearly, things are going precisely as the international neocommunists want.

And the Free World's political leadership are fools. Can't they read the polls? Don't they realize that We The People are saying we don't buy into it and that we won't sacrifice jackshit for it?

"Drill, baby, drill"... Now that's the sort of language the People of the Free World want to hear more of, and will vote based upon.

Who cares about the future of the planet? We, after all, will eventually be leaving it anyway. We only get to be here once.

Besides, the climate change fraudsters actually have an ANTI-HUMANITY mentality. Many of the architects of the Big Lie, including Obama "Science Czar" John Holdren, are deranged-lunatic eugeneticists who want to kill as many babies as possible (no wonder the Obamacrats want Americans to all shell out and pay for careless, live-in-the-moment, to-hell-with-consequences, hedonistic, selfish nymphomaniac morons to have all the abortions they want at no cost to themselves, boosting Big Abortion, Inc.'s profits in the process) and pretty much cull as much of the human population as possible. And I'm not convinced that their motivation is to "save the world", either... I'm convinced that it's greed; to have more of the world to themselves by having fewer of their fellow people demanding their fair share. Makes one think of the Nazis, doesn't it? Only more "sophisticated", of course, as they know they can't be seen as directly copying history and must be seen to be doing "good", even if it's really a big-lie cover for their real agenda, selfish ends achieved by criminal means.
Posted by Canadian Sentinel at 12:28 AM