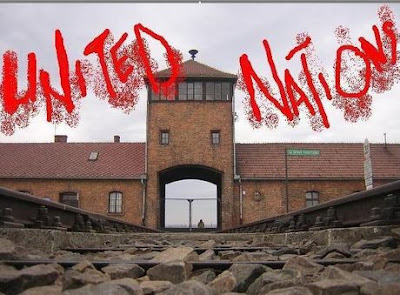 The United Nations's own record of behavior speaks for itself.

Look at whom they permit as news organizations and whom they reject.

The pattern is shocking, unmistakable.

They allowed in the Jew-murdering Islamic-Supremacist terrorist group Hamas and the also-supremacist, racist, anti-Jew Nation of Islam's propaganda arm.

They reject all Taiwanese Press access requests and requests by others critical of the Chinese Communist Regime.

They deny access for the Epoch Times because the Chinese Communists hate it and because many of its employees happen to be Falun Gong. Ah. Ok for Islamic Supremacist newspapers who kiss the SinoCommies' ass, but not for a Chinese newspaper critical of the Regime and who has some Falun Gong folks on staff. Clearly discriminatory and submissive to evil regimes. Indubitably. "Progressives" will generally be just fine with this.

The Taliban got in.

How? NAMBLA was part of the International Gay and Lesbian Association, ILGA, which was also granted U.N. NGO status.

I guess it's no surprise that they denied World Net Daily access, based on false pretenses, and based on nothing but discrimination. After all, WND dares to tell the inconvenient truth about the UN and about those illegitimate entities the UN accepts as "legitimate".

One can't help but wonder what kind of organization the United Nations really is, what its agenda is (evil, obviously, and neocommunism and all sorts of criminality, corruption, depravity, etc) and why the hell we still bother to give those freaks the time of day!

I say the Free World must abandon the UN completely as an illegitimate, utterly useless body that kowtows to evildoers, butchers and intolerant supremacists.

Oh, and by the way, the Copenhagen Chicken-Little summit thingy is a UN thingy.
Posted by Canadian Sentinel at 4:10 AM