Commited against the Falun Gong People.

By the same judge who has issued arrest warrants for former Nazi SS guards.

A Holocaust is a Holocaust regardless of who the victims are.

I believe this occasion deserves a special spotlight on the most prominent evildoer under indictment... 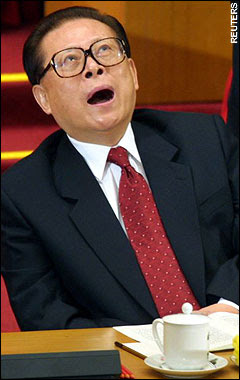 ABOVE: Jiang Zemin, monumentally gross Commie pig that he is, yawns/burps/tilts 'n' farts, at left. At right, the Commie bastard picks his nose. Note his use of his middle finger, his fattest, longest finger. Sheesh!

BELOW: He, with stubbornly sticky nostril debris now on the index finger of his other hand, frustrated with his inability to shake the bloody thing off, tells the other Commie bastard and current CCP bigwig, the clueless Hu Jintao, that he wants to shake hands for the Big Old Media's enjoyment. Then they shake. Boogey transfer successful! 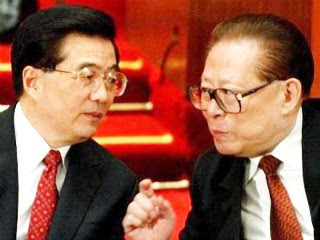 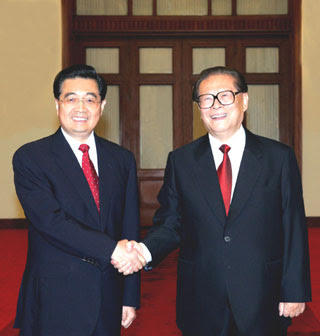 Even comrade Commie bastards will, being the crafty and sneaky thugs they are, happily screw one another when convenient.

They're a danger to all, including their own ilk.

Their evil lifestyle and philosophy will be their undoing.

Posted by Canadian Sentinel at 5:49 AM

Gross but yes very necessary to show what breeding these heads of the evil communist regime have. Thanks for posting out and letting more decent citizens know the real story . Now if we can only get thru to more leaders of democratic nations.

Speaking of gross, I watched the couple-of-years-ago Brian Mulroney biography on TV and saw a clip from when he met with Deng Xiaoping. General Deng was the rudest pig on the international scene, chewing tobacco and spitting into a receptacle right there on the floor between their feet. Mulroney was visibly shocked and appalled by the douchebaggy little goblin. Too bad I couldn't find it on YouTube- I wanted to post that clip.

Leftists can be real pigs, especially murderous Commie bastard ones.

As for the Free World's leadership, it's probably going to take a big shock, like a big war with the Commies or something, to make them see reason again and take action. Unfortunately this is how it appears to work. It took the Nazis and Imperial Japanese and WWII to give the world a good face slap, and then it took the Cold War. But without that, save for 9/11, which is all but forgotten now, unfortunately they've gone back into moral slumber.

We're today's Churchills who can see what's going on. Eventually others will follow, after they get their own face slap once the Commies finally crap their pants and blame someone else for doing it.

Yeah the communist regime went thru several purges ( infact roughly one each decade to pump fear into the poor Chinese) including destroying all scriptures and religious artefacts, sculptures and Buddha statues etc while systematically destroying all of Chinas rich culture.
Academics etc.. you know the old communist path. What was rather insidious was how they wanted the Chinese to become like animals so the dirtier and more foul you were the closer you were to perfection. They literally turned upside down a nation who revered the relationship between Heaven and Earth and their rich culture reflected that.

In the nine commentaries the 6 commentary is all about that- the destruction of the Chinese culture /soul.

So after reading that i understood why the Chinese people were so dirty and unclean and could do foul things like Jiang Zemin with regards to their habits..

Moral slumber is a good phrase for it. But the other times were for practice this time its for real.Which is why we have 100 million Falun Gong practitioners on the planet in such a short time ready to help people awaken to it.

As a Chinese, seeing this scumbag (calling Commies and Islamist pigs is an insult to pigs, I like porks and I wanna respec them) and Mao being the "Face" (at least political wise) of Chinese pains me immensely. I really want to see this nose digging bastard get what he deserved and I am more than happy to show my version of "peacefulness". BTW, I am not a Falun Gong, I respect their view and stuff but I think a revolution paved with Commie and Leftist blood is the only way out for Chinese and all of us.

Sorry, I'm not sure which side you are on still? Sounds like you would like to see an end to the communist regime in China? Which scumbag are you referring to?

Hi, Jana. "Anonymous" can speak for his/her part, but I believe "Anonymous" is on our side.

I believe the "scumbag" being referred to is Zemin, the most prominent indictee.

It's clear to me from Anon's writing that, indeed, an end to the CCP regime is desired.

Of course, it's not surprising that many believe that a civil war (revolution) is needed.

We're already reading in the ET about big protests by civilians against the Regime, and they're getting more and more physical.

No surprise. After all, the CCP has been extremely "physical" since the beginning, and, according to Karma, they'll be facing their own just desserts...

No regime is immortal. Its own badness and ill will are its own carcinogens. Eventually the cancer it caused itself will spread and there'll be nothing it can do to stop it from causing its undoing.

Of course the CCP will fall. History is the proof. All big empires, whether they're good or evil, do eventually fall (either by being terminated completely or simply reduced and transformed into something different) in some way or another, either via inevitable change or via internal revolution or war with other nations.

To any CCPers reading this, y'all need to understand that the CCP's demise is inevitable. So it's best to get out of the club while the getting out is still easy. After all, when things get tough, the CCP leadership won't take kindly to any they suspect of planning to jump ship. So now is a good time, while they're still delusional and believe they're an invulnerable, immortal entity that can afford to lose a few members.

Those wanting quit the Chinese communist regime and all its affiliated organisations can do so on line without using your own name. The important thing is your heart and soul turns it back on the evil ccp. Its the only way to peacefully and resolutely withdraw without any violence.
http://ninecommentaries.com/

Hey Anonymous, thanks for being on the good side. I would like to be responsible to you so I'm asking you to withdraw from the CCP and its affiliated organisations. The heavens will destroy the CCP inside China and it you have pledged your oath to CCP then withdraw from on the link below you will go down with it.. SO Please please with draw. You can use fake name its your heart and mind that counts.http://tuidang.dajiyuan.com/