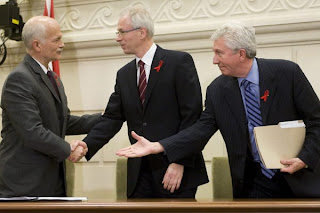 The Hardline Left-wing Socialists behind the imminent Putsch to overthrow the just-weeks-ago-duly-elected Canadian Conservative government, with phony claims of a non-apparent state of emergency/crisis/catastrophe as a justification for their draconian move: L to R: Jack Layton, NDP; Stephane Dion, Liberal; Gilles Duceppe, Bloc Quebecois 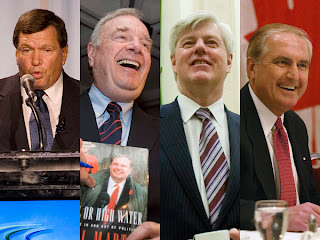 Look who's going to be deciding Canada's economic future... none of these men were elected to have any say. Frank McKenna, the NB Premier who banned radar detectors and then was pulled over for operating one himself; Paul Martin- need I say more- Canadians rejected him as PM; John Manley, a Librano himself; Roy Romanow, former socialist/NDP Premier of Saskatchewan. Canadians did NOT ask for these guys, nor were they asked. We aren't being asked by these subversives if we want their help, but they don't care what we want, and they're going right ahead to impose their illegitimate will upon us without our consent. And they won't be accountable, as they don't have to worry about losing Commons seats they don't have anyway.

So we have the Hard-Left Socialists (Liberals and NDP) hastily gluing together a coalition of sorts, with the conditional (and volatile) support of the Quebec separatist Bloc. They appear set to overthrow the duly elected (just a few short weeks ago) Conservative government, claiming a state of emergency, a crisis, an economic catastrophe calling for draconian, extreme measures.

Well, this reminds me of the 1991 Soviet Putsch that lasted three days and ended with the total collapse of the Soviet Union. 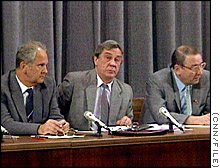 This is not called for. There is no state of emergency.

They've been plotting this coup d'etat since before they even knew anything about what was going to be in the economic update; it's proven, via Jack Layton's own spoken words, caught on tape by a Conservative who was invited, by error, apparently, but regardless still invited, to participate in a teleconference call with them. If it hadn't been for the natural stupidity of hardcore Leftists such as led by Jack Layton, this wouldn't have happened, and they have only themselves to blame for their culture of stupidity which infects all involved. They're mad at being caught with their pants down (figuratively this time) and are trying to claim that the taping was illegal even though the participant was invited and apparently wasn't told it wasn't to be recorded. Typical Leftists- blaming others for their own stupidity. So it's NOT about the economy, and Stephane Dion, the French Citizen who will be Prime Minister of Canada following the illegitimate putsch, is LYING. Canadians already rejected him just a few short weeks ago!

There is no case made for a coup d'etat/putsch. There is no economic emergency, crisis or catastrophe. Sure, there appears to be a recession, a mild one. And there appears to be some problems with the so-called "Big Three" automakers, whose troubles are both of their own executives' and the unions' making, and who want the taxpayers to hand over billions of dollars just to tide them over for awhile (merely postponing the inevitable- massive job loss no matter what, due to inevitable, unavoidable, absolutely radical, massive restructuring the likes of which we've never seen before in this industry).

The Lefitst usurpers/subversives/democracy-haters want to plunge Canada $30 billion-plus into the red, shovelling piles and piles onto the debt, throwing into the toilet all the hard taxpayer work done to pay it down over the years. All for the sake of dogmatic Keynesian extremism. You know, we've been down this socialist, big-government interventionism road before and we know where we ended up because of it. These Leftists are taking us backwards into the olden days of deep socialist redness.

If one follows the news today, one will note that the stock markets have sunk like a stone in reaction to the news of the coming putsch/coup d'etat/overthrow of the democratically elected government without a legitimate reason, without any case made for doing so. Talk about massive selloff! Talk about dumping the assets before the hardcore socialists steal the reins of power away from the democratically elected government! One would think that if the Conservatives' economic update was a crisis, emergency, catastrophe, then the stock markets would've done that then. But no... because the stock markets know that what the socialists have planned is not going to help, and they have no confidence in the economic acumen in the socialists, so they're dumping their assets fast before they lose their value under a hard-line socialist regime who's going to take power without democratic consent and with a false excuse.

Only Black Monday – the infamous 11 per cent crash of 1987 – saw the market fall more in percentage terms. Three of the market's five worst days have now come in 2008.

“The turmoil generated by the uncertainty of these events in combination with the unknown of a new three-party coalition could prompt flight-to-safety flows in Canada,” said TD Securities Eric Lascelles in a research note. “The longer-term implications are far too uncertain to speculate about now, and rely not just upon whether Canada gets a new government but also on how any new hypothetical coalition government would govern, and how long it would last.”

Talk about uncertainty. The LAST thing we need now of all times! But here the socialists are, gleefully forcing it onto Canada! Isn't that wonderful!

Beyond the economic and democratic implications, one must understand that this is also going to spray tons of high-octane gasoline onto the flickering flames of Western Alienation and the Western Separatism movement. Without the Conservatives' steady, prudent, non-panicky, competent hands on the helm, the West will lose confidence in the Canadian Federation again due to this undemocratic, illegitimate coup d'etat by those anti-Western Eastern Leftist Socialist Extremists, propped up by the Hard-Left, Communistic, anti-Christian Quebec Separatist Bloc. The last thing our national unity situation needs is for Canada's future to be in the hands of a veto by the Quebec separatists under Gilles Duceppe, a real Communist, as seen below! 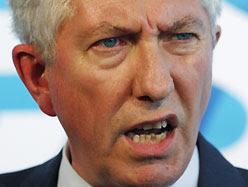 Gilles Duceppe. Communist hardliner. Christianophobe. Anti-Life. Wants to break up Canada. Canada's future is in his hands now, thanks to the Liberal-NDP Hard-Left Axis.
I do not want this. Do you?

It's time to stand up for Canada!
Posted by Canadian Sentinel at 11:00 PM