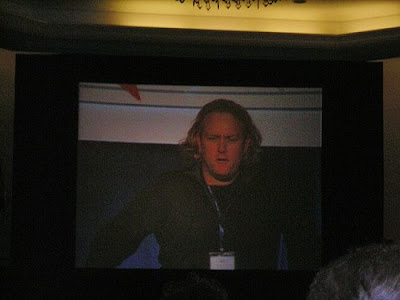 Andrew Breitbart himself on a big screen, looking as if casting a critical eye upon Hollywood

Andrew Breitbart? Who's he?

The publisher of the online news aggregator Breitbart.com helped launch and run two of today’s most influential media and political punditry websites, Arianna Huffington’s left-leaning The Huffington Post and Matt Drudge’s right-leaning Drudge Report. (...) Now the politically conservative Breitbart, 39, will debut his own collection of original material in his Big Hollywood group blog, a new home for right-of-center voices that want to sound off on the interplay of popular culture and politics. (...)

Now, not only has the conservative movement given up interest in America’s arts and entertainment industry, he says, the liberals’ lock on Hollywood ideas has resulted in a single-minded atmosphere that has become “just flat-out boring.” He hopes to use the Big Hollywood blog, which will go live Jan. 6 and be housed on Breitbart.com, to bring the political right back into the pop-and-politics discussion.

“My primary goal is to diversify Hollywood,” says Breitbart, whose 2004 critique of liberal Tinseltown, Hollywood, Interrupted, made The New York Times best-seller list. “Those people [in Hollywood] who dissent are so summarily attacked and dismissed that they learn to just keep their mouths shut. And there’s nothing I like more than to have debate free and open in America.”

Hey, excellent idea! It's time to shine the spotlight on... Hollywood!

It's time to expose the shady, decadence-and-depravity-pushing-and-encouraging, mean-spirited reality of Leftist-dominated Hollywood, to open it up, diversify it, make it more tolerant of and open-minded towards those who dare to have a mind of their own, as opposed to merely being a brainwashed, submissive-to-Leftist-dogma-and-political-correctness-gobbleddygook-spewing automaton for the sake of being allowed to be an actor, director, writer, etc., and make a living in the movie/showbiz industry.

In short, it is recognized that Hollywood is largely intolerant of people who aren't necessarily stark raving mad Left-wing activists like, say, Angelina Jolie, Sean Penn, Janeane Garofalo, George Clooney, plus sensationalist, ideologically-extreme and dishonest propaganda "documentary" filmmakers like Michael Moore and Al Gore... you name the dumbasses we've seen onscreen who, in real life, play (or, rather, ARE) de-facto Communist, anti-America hardliners, the very sort of folks who, in real life, are actually the characters which we used to (and rarely anymore, as the Good Guys are now being demonized in the movies as if they're somehow the Bad Guys, whereas the actual Bad Guys are written-in by clever Leftist writers as the victims) see in the movies as, rightly, the Bad Guys.

It is wrong to have Hollywood intimidating those who dare to break with the "norm", to speak their own minds, such as Jon Voigt and Chuck Norris. Of course, this intimidation doesn't make the news, but do we really think that such conservative actors aren't receiving some form of hatred, contempt and intimidation attempts from their Leftist, intolerant, narrow-minded Hollywood counterparts? It must be hard for them... It's time to open Hollywood up and drag it kicking and screaming out of its comfy, ideologically-confined box. It mustn't be allowed to be a closed society of ideologically-homogeneous extremist activists hellbent on social reengineering via propaganda and brainwashing via movies and television. In fact, it is a danger to Free World civilization to allow Hollywood to continue to be the way it is, which is, literally, the enemy within, a useful idiot of our foreign enemies, who, I suspect, have a lot of influence on the writers, directors, producers and actors, influencing the kind of films they make so as to impart at least subliminal messages that serve their interests and militate against those of the Free World.
Posted by Canadian Sentinel at 6:47 AM