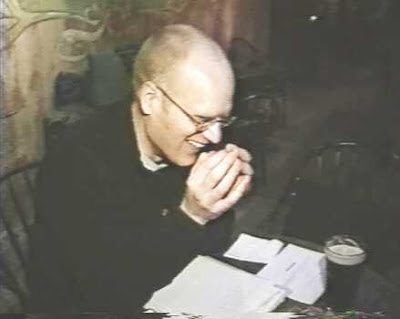 Richard Warman, above, tried to cover his own ass by narrowing the scope of his complaint to exclude the hateful posts which are believed, from credible, compelling evidence, to have been written by himself.
Below: His strongest backer and "I advise you to retain counsel" intimidation hitman, Warren "Prince of Darkness" Kinsella, himself a Leftwing radical militant extremist like Mr. Warman

Remember this damning exposure of Liberal Fascist aggressor Richard Warman, a phony "human rights" champion?
A good post is now up at SmallDeadAnimals... "What benefit can there be in allowing him to speak?"
Connie Fournier, one of those targeted by Warman's zealous censorship jihad, of FreeDominion.com writes in the comments at SmallDeadAnimals:

Initially the Anne Cools post was part of the CHRC complaint against Lemire because Warman said specifically that ALL of the posts on the Freedomsite forum were included in the complaint.

When he found out that Lemire's lawyer had the Cools post and that they were going to try to prove he made it, he not only moved to quash the Roger's subpoena, but he also narrowed down the posts that were to be included in the investigation and he excluded the Cools post (which was clearly hate speech). He then argued that the Cools post could not be discussed in the hearing because it was not part of the complaint.

This is not what one would expect an innocent man to do in this situation.

It is my understanding that Lemire's lawyer did eventually win the fight to subpoena Rogers, but their log files for that time were no longer in existence.

sounds a little suspect to me. i worked mainframe ops for big canadian companies... including a major bank... you have to keep computer backup tapes for seven years for audit purposes.

My, my, my... indeed, Richard Warman's actions certainly help us to believe that he has nothing to hide, that he's done nothing illegal/hateful... oh, yep; indeedy! Suuuure!
Posted by Canadian Sentinel at 5:06 PM