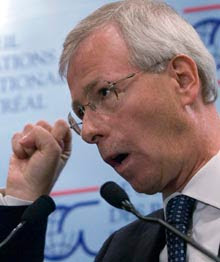 Above: Liberal "leader" Stephane Dion. So damn stupid!
UPDATE: It's come to my attention (Mike Duffy Live on CTV, Graham Richardson sitting in for the Duff, saying so) that M. Dion was speaking in his first language, French, not his second, English, so we cannot chalk his gaffe up to a language problem...
Story here. h/t: NationalNewswatch.com

"He has managed to, in one breath, demonstrate his complete ignorance and poor judgment about the most important foreign policy issue for Canada, while at the same time insulting a critical ally in the war on terror," said Jason Kenney, secretary of state for multiculturalism and Canadian identity.

Mamoona Amjed, press attache to the Pakistan High Commission in Ottawa, also issued a sharply worded statement, saying Dion's comments show a lack of understanding of on-the-ground realities, and insisted no foreign troops would be allowed to operate in the country under any circumstances.

Dion was quoted Wednesday saying: "We are going to have to discuss that (NATO action in Pakistan) very actively if they are not able to deal with it on their own. We could consider that option with the NATO forces ... ."

When will the average joe on the Canadian street finally realize that Stephane Dion, Liberal Party "leader", is plainly stupid and perhaps even insane, and has no business becoming Prime Minister? It's up to them, the voters, to make sure that he never becomes the leader of our county.
Oh, wait... maybe poor little Stephanie-Poo is just making yet another in a looooong string of assinine gaffes because his grasp of the English language is embarrassingly poor. To make it all worse, he demonstrates no desire to improve his command of the language of the majority of Canadians.
Whichever way you cut it, Stephane Dion isn't prime ministerial material. He wasn't even environment minister material, as he didn't do a bloody thing to try to reduce greenhouse gas emissions himself, despite hypocritically demanding the current government do the impossible!
Maybe he should just go back to his university job as a pompous-dullard, tweed-jacketed, Volvo 244-driving Leftist brainwasher!
Grab your knapsack, Stephie-girly-man, and go back to your comfy ivory tower in the sky where you can't cause any more international embarrassments! Better yet, why not move to France, your other nation of citizenship? The French, at least, are expected to make asses of themselves on the world stage (with current President Sarkozy the exception, of course)!
See also: Stephane Dion's Obama Moment

Mr. Dion's slip of the tongue raises the frightening theoretical possibility that every time he spoke as prime minister the media would have to wait for someone else to happen along and explain what he really meant. Of course, Canadians have recent and long experience of this style of government. But it was a luxury we could more easily afford before al-Qaeda and the Taliban became one of the world's geopolitical concerns.

Rather than dreaming up new campaigns for Canada and its allies to embark upon, we suggest Mr. Dion stiffen his backbone in regard to the war we are already fighting. Counterinsurgencies do not succeed without the application of sustained military pressure over a long period of years. If everyone were to say, "Let someone else handle the hard part," which is more or less Mr. Dion's formal position on Afghanistan, victory would be impossible.

Then again, maybe Stephane Dion and the Liberal Party of Canada want the Taliban and Al Qaeda to win. Liberals are, after all, Far-Leftists, and Far-Leftists, without a doubt, want the Islamofascists as well as the Communists to win. Those of us who have been doggedly digging up the truth over the years, particularly the proof available online, and who have been using our brains to understand the facts all put together and to identify unmistakable patterns pointing to the overall truth about the Far Left, know this very, very well.
If I'm wrong about that, then the alternative reality is that Stephane Dion and the Far Left are extraordinarily stupid and delusional and don't know what's what about the real world, wimpily allowing the state apparatus via the corrupt, conspiratorial mainstream media tell them what to believe and what should be done.
We can't afford leaders without brains! Not in this day and age!
Posted by Canadian Sentinel at 4:22 PM