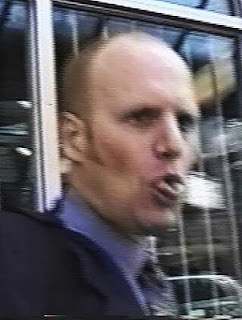 h/t: SmallDeadAnimals, where there's more, including reaction in comments section.

What a shocker. Richard Warman used to work at the Canadian "Human Rights" Commission.

And he's an infamous serial complainant against people who say derisive things about him online, hauling them before the Commission for offending him and being granted by the Commission thousands of dollars from them.

Is Richard Warman a racist bigot, or was he "just following orders" issued by his masters at the Canadian Human Rights Commission when he posted the headlined message above on a Freedomsite forum on September 5, 2003? Whatever the answer, the same CHRC that has ruled Bible verses to be hate speech doesn't seem to consider these words to be a problem.

But they are a big problem, for both Richard Warman and the CHRC, and the rest of what he wrote only makes matters worse.

“Not only is Canadian Senator Anne Cools is a Negro, she is also an immigrant! And she is also one helluva preachy c*nt. She does NOT belong in my Canada. My Anglo-Germanic people were here before there was a Canada and her kind have jumped in, polluted our race, and forced their bullshit down our throats. Time to go back to when the women nigger imports knew their place… And that place was NOT in public!

It may be mere coincidence that Richard Warman is in fact an Anglo-German, but it is not likely a coincidence at all that the owner of the website where Richard Warman posted this racist screed against Sen. Anne Cools came under attack by the CHRC shortly after Richard Warman began his complaint-less investigation there.

Read on... you really do need to read the rest to absorb what's going on here! Plus there's what appears to be concrete proof that would stand up in a court of law presided over by a scrupulous judge that it was Mr. Warman who wrote that disgusting, hateful drivel.

It appears that this is a scandal of unpredictable magnitude. That we haven't seen anything yet.

Now, whither the mainstream media? Here's a scandal for them. A scandal, for Pete's sake! They love scandals, after all! As for the MSM, I recommend you read this post.

See also: The Third Edge of the Sword,

The Globe and Mail is well aware of a problem with respect to the HRC. But they're not really reporting on it. All they're giving us is a commentary piece by Ezra Levant, who's fighting the HRC.

Posted by Canadian Sentinel at 6:15 PM