Russia Rings In 2010 By Cracking Down On Elderly Freedom Lovers 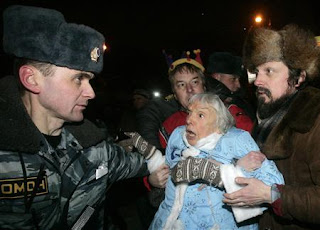 Arresting little old ladies for simply taking part in a demonstration in favor of freedom.

How low can Putin-Medvedev go?

Russia, to me, is looking a lot more and more like Nazi Germany these days.


"I don't know why I was detained... How could I possibly offer any resistance to anyone?" she said, quoted by Echo Moskvy radio, which reported that between 30 and 50 people had been detained.

A coalition of opposition groups organised the December 31 rally to defend their right to protest, as enshrined under Article 31 of the Russian constitution. Unsanctioned rallies are one of the few outlets for Russia's weak and fragmented opposition.

"Down with Putinism, Freedom to Russia," one protester shouted from the window of a bus being driven to a local police station, a reference to Prime Minister Vladimir Putin. The opposition say Putin was the architect of a major clampdown on civil liberties in Russia during his presidency from 2000-2008.


Apparently the crackdown by the Camo Cops is UNCONSTITUTIONAL.  As mentioned, the Russian Constitution guarantees freedom to protest.

Here comes "Crazy Ivan" to defend the unconstitutional actions of the Camo Cops and point a hypocritical finger at the Free World...

Most who stand up for Putinist Russia are just brainwashed.  They obviously don't understand the value of freedom, democracy, the rule of law and human rights.

Putin and his puppet Medvedev are deliberately ushering in a Neo-Soviet regime in Russia.

Thank goodness that in America even the Obamacrat Reich doesn't dare try to bully and silence the Tea Party People with police.  Luckily they just use the Big Old Media, deranged, desperate-for-work-and-money Hollyweird proxies and the White House Bully Pulpit.  So far, anyway.  No telling how far the Obamacrats will go to silence dissent; it's clear that they badly want to shut up all dissent.  Already they have no problem silencing anyone who dares to merely stand around holding a Bible anywhere within sight and earshot of abortion clinics and homosexually-themed events.  Of course, this happened even during Bush's presidency, to be fair (though it's really a local-police/local-politicial-leadership thing), but, hey, Obama promised "change", and the same stuff is still happening.

By the way, Happy New Year, everybody!

POWER TO THE PEOPLE!

IF LOOKS COULD KILL...

Posted by Canadian Sentinel at 10:01 AM

"Unsanctioned rallies are one of the few outlets for Russia's weak and fragmented opposition."

So if you a freedom lover, an old lady, an opposition or a dissident, then you are allowed to break the law, am I getting it right? :)

A "law" or an "order" that breaks the Constitution...

The only outlaw is the government.

The People are entitled to whatever the Constitution guarantees!

Any regime who would trample on the rights of The People...

"A "law" or an "order" that breaks the Constitution..."
O RLY? And if I wanted to organise a rally at exactly the same time and place where the US presidential inauguration takes place? Would I be allowed to do it? I doubt it. Same here. Moscow goverment can NOT ban the rally, but the place for it must be coordinated with the authorities to avoid conflicts with other public events that might take place at the same time and place. These "dissidents" refused to do so and said that they would protest wherever they want.

The law is perfectly logical, and so is opposition's decision NOT to abide by it.