The Liberal Party of Canada always claims to be a party of tolerance.

But it isn't.
We see that the Liberal Party of Canada is continuing its longstanding tradition of the politics of ethnicity and exclusion as well as continuing its trademark Goebbellian propaganda tactic of demonization of its opponents in classic pot-call-kettle-black style.

The Liberal Party of Canada is hugely populated with infighting, bigoted members who play the politics of ethnicity, defamation, supremacy and exclusion, including Islamic fascists who practice rabid antiSemitism, telling lies about Jews and so on.

The intolerance inside the Liberal Party of Canada is simply appalling and shocking.

I'm shocked, also, that the MSM isn't making more of a big stink about it.

If this kind of thing was happening in the Conservative Party, which it isn't, the MSM and the Liberals would be incessantly hurling accusations of bigotry and intolerance at the government.

Well, it's actually the Liberal Party of Canada who's full of intolerant bigots!

Know what? The Liberal Party isn't going to expel the intolerant bigots. Probably afraid of offending a certain group in doing so. A group infamous for going on murderous rampages when offended by the littlest of things, like simple cartoons!

The Liberals might get mad, but they cannot complain. After all, they're guilty of using the "Nazi" label in response to the government's telling the plain truth about how crappy the Liberal government was. Liberals can't handle the truth, which is that Liberal governments always suck big time... and that the Liberal Party is full of intolerant bigots!

Not to mention the criminal investigations into their conduct while in government.

The polling numbers out lately are evidence that the Canadian people are either unaware or have forgotten about how terribly corrupt and intolerant the Liberal Party really is.

We must, therefore, aggressively promulgate the plain truth about the so-called "Liberals" to Canadian voters so that they won't make the wrong choice and vote for these... hard-left extreme ideologues, crooks and various misfits who nevertheless delusionally believe they have some kind of supernatural entitlement to rule over Canada with an iron fist.
Rather like Mahmoud Ahmadinejad of Iran. The nuclear-obsessed Islamic supremacist/imperialist who has promised repeatedly to wipe out not only Israel but also the "entire Anglo-Saxon world".

Don't be fooled. The Liberals are bad. Very, very bad.
Maybe they should shut up with the demonization. It only makes me return the fire.
All's fair in war.

Above: an intolerant dictator with a party full of antiSemites. Below: what's the difference? 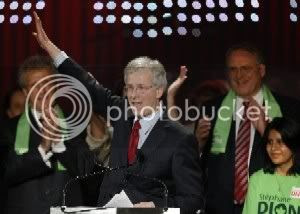 Got a problem, M. Dion? Then do something about Bill Graham for suggesting that the government is like the Nazis.

And stop defaming the government, yourself! Why don't you become tolerant and stop practicing exclusion and demonization, Nazi-style? Is it because you want to win at any and all costs and will stop at nothing to do so? Like a certain dictator pictured above you? Is this who you really are? Say it isn't so... and prove it, too!

Clean up the Liberal Party!

Tell your Senators to pass the Federal Accountability Act to prove you're serious about clean, ethical, accountable, lawful government!

You can't complain until you sack Bill Graham! If you don't, then you're no better than he is!

Posted by Canadian Sentinel at 7:12 AM