Dion a Flip-Flopper on Afghanistan: Harper 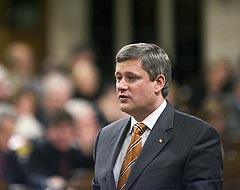 Prime Minister Stephen Harper, above, criticizes Stephane Dion, below, for his brazen flip-flopping on whether having the Canadian Forces in Afghanistan to prevent the retaking of that country by the bloodthirsty, barbaric Talbian Islamofascists, is a good idea or not.

"I don't plan to call an election on Afghanistan . . . Our government's not going to stand back here and play political games," Harper said.

"I mean, what kind of politician would do that? What kind of person would sit around the cabinet table, vote to send our troops, our young men and women into the most dangerous province of probably the most dangerous country in the world, and then a few months later say, 'Well, I'm not sure they should be there.' " 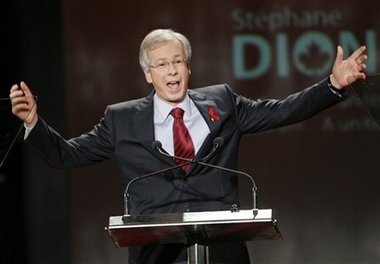 Remember, John Kerry flip-flopped on Iraq: he first supported the war, then he was against it... also to try to win ultra-extreme Dhimmi leftwing votes. Birds of a moonbat feather definitely flock together!

Posted by Canadian Sentinel at 7:25 AM