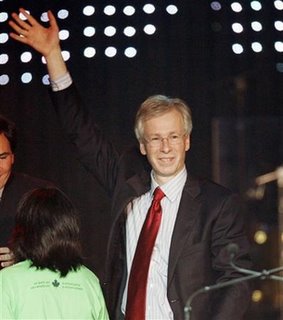 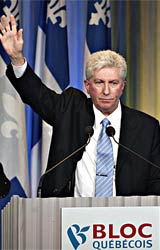 Are joining forces to simply defeat the Canadian government... just because they want to!

Why? That's what we must ask them from now on. Demand that they justify an election less than a year since the last one. What's the imperative? What's the emergency?

I mean, the current government is quite a good, effective one, certainly compared to previous administrations.

The current government is working hard, keeping its promises as quickly as it can.

Why do we need an election now? Just because Stephane Dion wants to become the Liberal dictator of Canuckistan? Because Gilles Duceppe wants to prevent the Conservatives of Stephen Harper from actually formulating and bringing forth a solution to the "fiscal imbalance", thus dashing Duceppe's hopes for Quebec separatism and his possible ambition to be the ruler of a new country?

If that's the way it has to be... ok. We'll be ready. We're ready now to fight the ultra-extreme leftwing radicals!

h/t: Maz2 for catching the headline.

Indeed... a Frenchman and a separatist. Hell, one could apply both labels to both of the guys above with their arms raised thusly... in some kind of leftwing ideological salute or something.

Posted by Canadian Sentinel at 3:29 PM