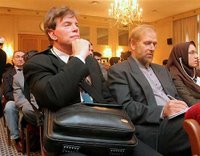 Infamous American racist/bigot David Duke is actually a leftwing extremist/Dhimmi submissive. That's right: I'm calling him as such, the piece of crap.

Stories here & here. Duke attended Iranian tyrant Mahmoud Amadinejad's Holocaust-denial conference and did some of his own denying.

Anti-American nutcases. Anti-war leftists. Islamic fascists. Communists. Anti-Semites. White racists. All kinds of terrible, intolerant folks. They're all in it together. What a frightening coalition. Together, they threaten humanity. 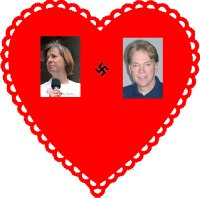 All kinds of bigots, leftists, Islamofascists, etc... they're all in it together in one grand coalition... one Axis of Evil.

The Islamofascist jihadists have a new ally. So does the ultra-far left. Didn't anyone see this coming?

Evil is as evil does, whatever form it assumes.

Posted by Canadian Sentinel at 5:05 AM