"As a result of the some of the slurs and negative comments that were made, it's made people question certain things," she said.

Slurs? What slurs? MacKay didn't make any slur. Norm Spector merely rendered a perfectly valid assessment of Belinda's character, backed by her actual behavior over time. That's not a slur- it's a well-deserved, if quite blunt and not-so-pleasant criticism. Ralph Klein? Well, that's Ralph- he's a funny guy, and he didn't make a "slur"- he merely did standup comedy which Belinda didn't like- he simply joked that the only conservative bone in Belinda's body was that of her former boyfriend.

Again, Belinda won't survive in political life if she's going to go crying to the MSM, crying wolf about "slurs" or "sexism" every time someone criticizes her actions, which indeed do deserve criticism.

As for the following which she said,

"I think it's raised the level of debate, sometimes uncivilized debate in the House of Commons, and made people think about how we can attract more women in to politics. Certainly these slurs don't help, but if they can help change things for the future then that's a good thing."

Oh, really? Raised the level of debate? I think not, except in Belinda's own mind, if indeed it's working. If anything, the left is lowering the level of debate by obsessing over alleged utterances and arguing over whether they constitute "slurs" or "sexism", expecting people to believe that they are just 'cause Belinda says so. There are far bigger issues to be debated than this bad-behavior, unethical, immoral lady being criticized.

It seems to me that each time someone criticizes Belinda Stronach, she plays the sex card!

Suuuure- perfect, flawless Princess Belinda can do no wrong. Anyone criticizing her is only doing so 'cause she's a girl. Oh, yeah, riiiiight. Suuuuure. Yup!

Defecting to the Liberals, dumping Peter, the guy with the dog, in exchange for a newly-fabricated Cabinet post right before a very historic vote (the SSM vote!)... how is that not-wrong? Scratch Paulie's bum; he'll scratch yours, too, Belinda! It just stinks!

After all, she's a Liberal/Liebrano, for Heaven's sake! Nothing "right" about that!

Overall, Belinda's speech the other day was just a lot of hot air, pure political-propaganda opinion. Anyone who believes her and follows her is a moonbat anyway, so don't be surprised if the newly-brunette Liebrano Pied Piper develops a larger following of mice (or were they a larger similar creature?).... 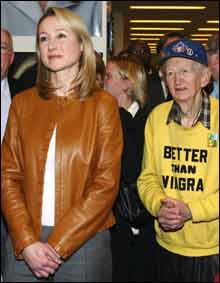 Belinda and her biggest fan 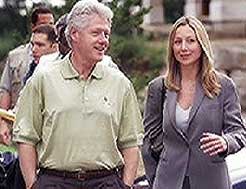 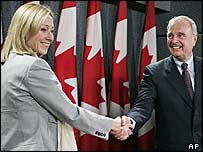 Belinda defecting to the dark side, welcomed by the inept, radically-leftist Paul "Mr. Dithers" Martin.

This is the company Belinda Stronach keeps. Wonder who else she hangs with?

Posted by Canadian Sentinel at 2:12 PM