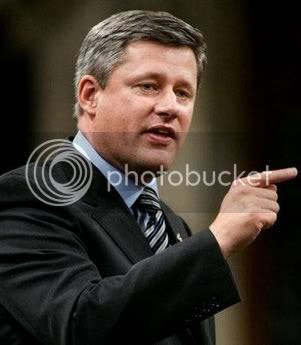 Canadian Prime Minister Stephen Harper tells it like it is: Hamas is genocidal.

"We will not solve the Palestinian-Israeli problem, as difficult as that is, through organizations that advocate violence and advocate wiping Israel off the face of the Earth,"

"It's unfortunate because with Hamas, and with Hezbollah in Lebanon, it has made it very difficult to have dialogue -- and dialogue is ultimately necessary to have peace in the long term -- but we are not going to sit down with people whose objectives are ultimately genocidal."

Under the Conservatives, Canada was the first country, ahead of even the United States, to withdraw financial aid to the Hamas-led Palestinian government. As other countries questioned and in some cases condemned Israel's bombing of Lebanon this summer, Mr. Harper initially described the bombardment as a "measured response."

He also indicates that he doesn't care if he loses the next election because of his counter-Islamic-fascism stance, because:

"I have to do what I think is right for the long-term security interest of this country and right for the men and women who have put themselves on the line."

That means that under Stephen Harper and the Conservatives, Canada will not speak to murdermongering barbarians like Hamas and Hezbollah. We don't talk to the Taliban, either, nor Al Qaeda.

Personally, I'd prefer also not dealing with Abu Mazen (Abbas) of Fatah, which the Globe and Mail article wrongly calls "secular". Only an ignorant Dhimmi would believe that Fatah and Mazen are secular moderates. It's all about political optics.

Personally, I'd give the Muslims an ultimatum: total peace, now... or else. Period.

Of course, it isn't a perfect world. The next move is likely to be that of the Muslims. After all, they always draw first blood.
Posted by Canadian Sentinel at 6:00 PM