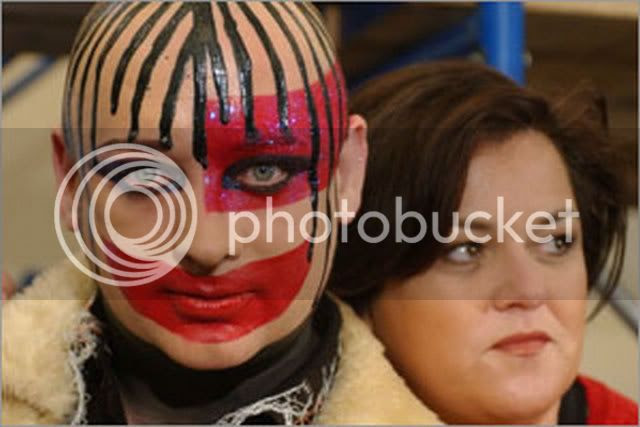 Above: Rosie O'Donnel, to Boy George's left. Moonbats galore!
(I'm not going to indicate she's "on the right" or "to the right" of BG above, and certainly not going to use "right" in any way whatsoever to describe Rosie O'Donnel!)
Rosie O'Donnel. Leftwing extremist. Dhimmi. Lesbian. Goes totally nuts when anyone says anything non-endorsive about homosexuality.

Infamous for saying terrible things about Christians/Christianity and for saying we shouldn't be afraid of Islamic jihadists because "they're moms and dads like you".

Now Rosie is under fire for uttering racist slurs against the Chinese.

Yep. Liberals/leftists are tolerant and non-racist. Homosexuals are naturally tolerant of others. Sure.

Rosie O'Donnel is indeed an excellent spokesperson for the liberal/left and for gays, lesbians, bisexuals and the transgendered.

But don't look to the liberal left, nor to sexual "minorities" to denounce or turn their back on Rosie. Don't expect Rosie to be fired. Expect the MSM to try to extinguish the flame before it ignites the kindling underneath the wood of uproar over racism.

She'll get away with it for sure. Because she's a member of one of the "favored groups" of the left/MSM and can therefore pretty much get away with anything.

Do you think that if she was a straight conservative, she'd be let off the hook so easily?

Hell, remember the uproar over the intolerant utterances of Mel Gibson and Michael Richards regarding Jews and Blacks? They were pilloried incessantly all over the MSM. They were forced to kiss all kinds of ass. Their careers are forever tainted.

I somehow seriously doubt that someone like Rosie will even be forced to take "sensitivity training", as, after all, it's really just something invented by the left to intimidate regular people into thinking the way the left wants everyone to think.

Rosie refuses to apologize or recant. She attempts to rationalize, to justify, as if she has some kind of "right" to say such things.

But the Chinese community is offended and wants an apology.

By the way, where the hell is the ACLU? Don't they care about the Chinese being subject to such absuive language by public figures? I guess the ACLU is too gosh-darned busy with their obsessive campaign to exterminate Christianity, banning crosses, Bibles, the Ten Commandments, prayer... next thing we know they'll be breaking windows in Christian-owned businesses and burning down churches... so I guess they're too bloody busy to give a flying feck at a rolling doughnut about minorities being verbally abused! Perhaps they let homosexuals and other sexual "minorities" get away with this sort of thing? Well, no surprise there, as the left has its own standards... and leftism is, after all, a mental disorder.

Who can blame us for thinking that? Not Rosie. Not the ACLU.
Posted by Canadian Sentinel at 9:00 PM