There are consequences for brainlessly kowtowing to the slick, ruthless Soros-Obama Machine.

Now Florida real estate company owner Fabian Calvo has told WND that he's cancelling his contracts for two major billboards owned by Lamar that he had been using to advertising his apartments.

Calvo, who also is a talk radio host in the Tampa Bay area, said, "I am cancelling my billboards with Lamar."

He said, "It's just unbelievably wrong that not only would they deny WND the freedom of speech they should have, but at the same time be fearful of this administration."

I guess Lamar will be needing some of that freshly-minted, unsupported-by-anything-of-value, long-term-hyperinflation-threatening bailout money.

Or maybe Fuhrer Obama will take over Lamar and hand over the day-to-day operations to tightasses in ties and suits who know nothing about the business at all. Yep. Communism.

See? People are afraid of Obama and his regime. Why? Why are these people so frightening, so threatening? How is it they are so astonishingly able to coerce and compel people to engage in self-and-economically-destructive behavior?

Leftists and Obamite propagandist attack clowns will predictably accuse critics of being "racist". But they know that this isn't true. They know the criticism is very warranted. So they seek to heavy-handedly, dictatorily silence all opposition, even going so far as to issue a DHS document warning that ALL dissidents and opponents of the regime are to be considered by law enforcement as potential terrorists. Each and every American who doesn't submit to the Soros-Obama Regime Agenda is deemed an "extremist". My, but isn't this so... communist? So... fascist?

What is the hidden agenda behind all of this destructive, neo-communist bullshit the Regime's forcing upon America so fast and furiously?

Who's really directing things? Obviously neither Obama, nor Congress, nor the Senate. These folks are obviously just puppets of other folks who control them. So, obviously, is the Old Media, who simply won't question, nor investigate... 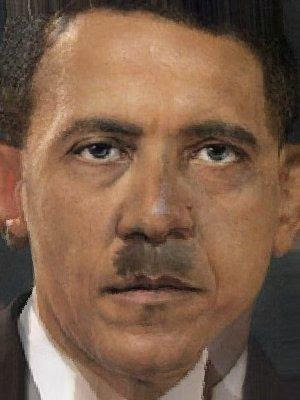 Joe the Plumber met this guy in person, and knew immediately the danger he posed to America.

How far is this nightmare going to go???
Posted by Canadian Sentinel at 6:11 AM