Iggy Libs Back Off On Bluff Over $3B 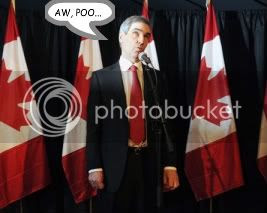 Above: Liberal Leader (unelected and to remain so, for the Party has done away with democracy) Michael "Iggy" Ignatieff, who continues, by the way, to employ Warren "The Attack Clown" Kinsella. Iggy pussied out, just like his predecessor, the elected-to-be-Leader Stephane "Do-Over" Dion.
Just like the Dion Libs.

OTTAWA — The Harper government won approval Tuesday to quickly start pumping $3-billion into Canada's sputtering economy after Liberals backed off their demand for details on how the money will be spent.

Imagine that. The Liberals wanted earmarks! The very thing Iggy's idol Obama and his Demmies are being blasted for having, despite a campaign promise to do away with them!

Provision for the special stimulus fund was included in a spending bill, which passed the House of Commons by a vote of 210-82 with the support of Conservative and Liberal MPs.

Deja vu all over again! The other Far-Left parties opposed, but the Liberals pussied and gave in. Again, just like they did with Dion!

The more things change, the more they stay the same.

Only three weeks ago, Liberal Leader Michael Ignatieff insisted he would never support the fund without some advance idea of how it would be spent. He was adamant despite Prime Minister Stephen Harper's warning that the fund constituted a confidence matter and that opposition parties would “find themselves in an election” if they blocked it.

“I am not writing a blank cheque on $3-billion. No Canadian would respect me if I did,” Mr. Ignatieff said at the time.

Back to the same old routine...

"It is apparent that the Liberal Party of Canada is on the road to self-destruction," states the document, whose authors identify themselves only as "concerned Liberals." It says the party "has been wounded by years of internal division. The wound cannot heal by itself, it needs to be honestly addressed …

"The longer the truth remains hidden and unspoken, the more the wound festers and the infection spreads," it continues. It says that for the well-being of the party "we need to break the silence about the perversity of eroding democratic decision making, particularly in the policy process" and "the impropriety of ignoring the LPC Constitution whenever that document becomes inconvenient."

Again with Liberals ignoring constitutions when they become inconvenient, like Canada's and their own Party's. And these guys demand that Canadians "trust them"?!

(...)"How can they maintain unity? There was no loyalty to the last leader. What makes them expect there's going to be loyalty to this leader? They set a precedent and the people around undermined him, sabotaged him and then left. He wasn't a perfect soul, he being Stéphane Dion. He made a lot of mistakes and I was happy when he resigned. But we sort of kicked him when he was down already." 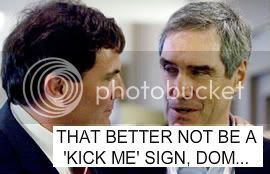 Posted by Canadian Sentinel at 9:58 PM