Terror Camp in Combermere, Ontario and Other Locations in Canada 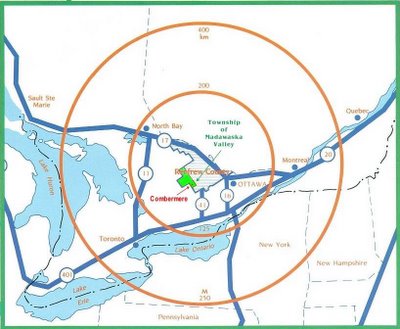 Continuing my investigation, I've come across information on a specific location inside of Canada of a Jamaat ul Fuqra (JuF) "jamaat", a rural community of Islamists appparently training in terrorism.

The jamaat in question is located in the Madawaska Valley in Combermere, Ontario.

Note that this is just outside of Ottawa!

The information comes from Defense Watch . It's an article posted on Free Republic. It's one bloody hell of a read. Go and read it!

A couple of excerpts for the bigger picture:

The upstate New York town of Hancock serves as the American headquarters for al Fuqra, with at least six major rural communities, jamaats, of two to three hundred members located in Red House, Va., Tulare County, Cal., Commerce, Ga., York, S.C., Dover, Tenn., and Combermere, Canada. Total membership in al Fuqra is believed to be between one and three thousand, with smaller jamaats being reported in over 25 locations throughout the United States, Canada, and the Caribbean. The communities themselves are primarily walled or fenced-in gatherings of trailers or mobile homes. At least three of the compounds are known to have firing ranges, and the compound in the Sierra Nevada Mountains of California has a fully functional airfield.

Gilani launched his U.S. operations in 1980. Within ten years, Fuqra's communes were billing themselves as havens where Muslim converts--many of them inner-city blacks, sometimes recruited in prison--could build new lives. At least seven such communities are active today, in Hancock, N.Y.; Red House, Va.; Tulare County, Calif.; Commerce, Ga.; York, S.C.; Dover, Tenn.; and Combermere, Canada. While some of these enclaves contain only rudimentary buildings and trailers, the California compound has 300 residents on a 440-acre spread, according to a recent report by a local ABC station. Residents deny any involvement with terror, but Fuqra has a history of getting into trouble with the law.

Over the years, at least a dozen Fuqra members have been convicted of crimes including conspiracy to commit murder, firebombing, gun smuggling, and workers' compensation fraud in the United States or Canada. And Fuqra members are suspects in at least 10 unsolved assassinations and 17 firebombings between 1979 and 1990. Nor is Fuqra's criminal activity all in the past. In the last year alone, a resident of the California compound was charged with first degree murder in the shooting of a sheriff's deputy; another was charged with gun smuggling; the state of California launched an investigation into the fate of more than a million dollars in public funds given to a charter school run by Fuqra leaders; and two residents of the Red House community were convicted of firearms violations, while a third awaits trial.

See also CP and The Catskill Chronicle (for liveblogging of the exposure and for screenshots of the camp itself, acquired from FOX 5 NY promos).
Posted by Canadian Sentinel at 8:53 PM