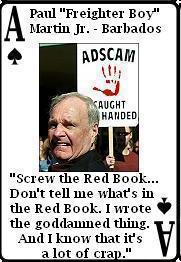 Here's proof that the ruling Paul Martin "Liberal" regime is not only corrupt, but fascist and totally disregards the human and Charter rights of Canadians.
Based on the posting from Rabble.ca (yes, that Rabble, believe it or not):
(Emphasis mine):

Yves Engler, a member of Haiti Action Montreal and a frequent contributor to rabble.ca, is being kept in jail over the weekend after he disrupted a speech by the Prime Minister Thursday morning shouting “Paul Martin lies, Haitians die.”

Crown prosecutors refused to grant his release when Engler appeared in court Friday, 30 hours after being detained. He will be in court again Monday.

Wow- this by a government that allows child sex-killer Karla Homolka to walk freely among us with zero restrictions on her activities as well as the terrorist Al Qaeda, Bin Laden-associated family the Khadrs.
The current state regime under Paul Martin's "Liberals", the incessant trumpeters of the Charter of Rights and Freedoms, human rights and "Canadian values", etc. are totally intolerant of anyone who would say "Paul Martin lies, Haitians die". Contrast this with the fact that Americans are always saying similar and worse about President George Bush and get away with it completely. This is so damning against Paul Martin. It is a smoking gun as to his intolerance of dissent and fascism against freedom of expression. Whose rights will Paul Martin take away next? Mine? Yours?
The report continues with this quotation:

"Yves Engler has been extremely active in trying to make the Liberals accountable for their role in the overthrow of Haiti's elected government and the resulting human rights disaster,” said Barry-Shaw. “He's obviously made some important people very angry.”

Now, will the MSM say anything about this? I bloody well doubt it to hell! No way would the ever-Liberal-partisan MSM ever do anything to embarrass or hurt the electoral prospects of their Liberal overlords! Just watch them remain silent on Paul Martin and his so-called "Liberals" while simultaneously grasping at whatever tiny straws they can find and incessantly poking Stephen Harper and the Conservatives with them, thus manipulating the perceptions of the voters unfairly against them, consequently falsely boosting the public esteem of the fascistic, dangerous, frightening "Liberals" of Paul Martin.
Same thing: the MSM kept its mouth completely shut about Paul Martin's post-tsunami photo op in Sri Lanka wherein he had his RCMP bodyguards physically suppress the freedom of the Canadian press people so they couldn't report on what was happening and tell Canadians the truth about what kind of a man Paul Martin really is. There's also a damning video of the whole bloody thing here at Canada Free Press. See more here and here for more jaw-dropping-shocking evidence of just how far the scary corruption of Paul Martin reaches all over the place without regards to the goodness or evilness of those with whom he and his cronies do business. Terrorists and Saddam Hussein enter the picture there.
And be certain to read Lorrie Goldstein's column criticizing the MSM for not asking questions with regards to why Canadians find Paul Martin scary while always being profuse with the questions and innuendo about Stephen Harper's falsely alleged "scariness".
If you love Canada, vote Paul Martin and his "Liberals" out of office this election. Vote for Stephen Harper's Conservatives. They're very good people.
H/T: Anonalogue for the playing card of Paul Martin
Posted by Canadian Sentinel at 9:52 AM