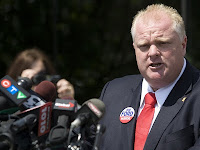 HEY! Why doesn't The Red Star probe Obama's suspicious claims re HIS post-secondary education... and his other claims that haven't been proven?

Why just go after a conservative dude? Why is Obama's stuff exempt from inquiry?

And why does World Net Daily get blasted by the Left for daring to investigate Obama's claims about HIS background, but it's ok for a left-wing rag to investigate Rob Ford's?
Posted by Canadian Sentinel at 4:58 AM

The red star investigating? that's strange, so I guess from now on that the 'red' star would go after Dalton for his creation to the largest debt facing Ontario. Or am I to understand that Dalton is entitled to increasing Ontario's debt to $22? Billion without an educated question from any of the 'star' reporters.

If anyone at the 'red' star ever did their educated job as real reporters-the LPOC nor Dalton would be standing right now. So, they are not that educated at all and Rob Ford can easily tell them that.