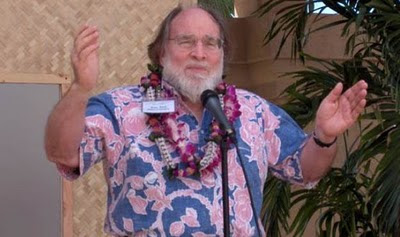 NO Obama birth certificate:
Even the Governor can't find one.
Does it even exist?
Did it ever?
Is it all a Big Lie?
Apparently it doesn't exist.  This corroborates an affidavit recently signed by a former Hawaii elections official that states as much.

Moreover, can anyone in the DNC prove that they saw Obama's real, "long-form", original, paper birth certificate when they were supposed to be doing their job ensuring that the nominee adhered to the Constitution's "natural-born" (on legal American soil) Eligibility rule? 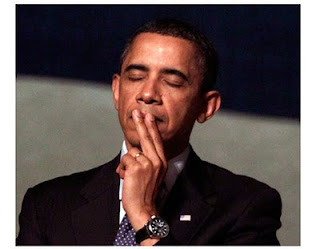 Smoking an imaginary cigarette?
Sorry, but it's not enough to try to intimidate us with threat of public ridicule just for asking for proof.

We're not stupid. We know when something hasn't been proven and when people are lying.  It's blatantly obvious, right in front of our eyes and unmistakable. 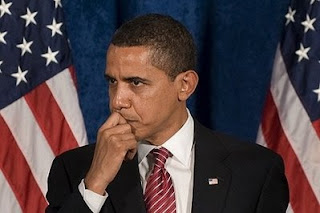 Beginning to realize that he's gonna be in deep doody?
Until the real, long-form birth certificate is shown, I will continue to hold that Obama is NOT the President, legally, constitutionally.  He's just an illegal occupier of the Office and his laws and executive orders and appointments... all null and void.

When it comes out that, indeed, he is an impostor, then the consequences can be managed in an orderly fashion.

Sure, it won't be easy, but THE LAW IS THE LAW!

Is that guilt... and fear?
Fear... of consequences for wrongdoing?  For breaking the law?
For disobeying the Constitution?
Caught with his pants down?
With red hands in the cookie jar?
Posted by Canadian Sentinel at 6:14 AM

What this means: anyone without a proof of his birth C, will and can be the next President of United States.
And when he or she is asked about their BC, their answer will be as simple as this" President OBama didn't prove his BC so why should I."

The same thing here if the liberals can steal abuse our E I funds without replacing it and so on and even use the media to their hearts content without the media ever questioning them (liberals)- why not another liberal or coalition prime ministers not do the same and get away with it.

Wouldn't the more productive course be to criticize Obama's policies and propose alternatives? I can respect your interest in birth certs and what have you but it really is just wanking at the end of the day IMO.

So you believe the Constitution and obeying it is... irrelevant, then?

If we let Obama off the hook by effectively saying, with or without actual words, that the Constitution is irrelevant and we don't have to obey it, then...

When a judge rules that a law made by a Republican administration is "unconstitutional", then we can just ignore the ruling as, after all, hey, the Constitution is irrelevant.

So let's... ban abortion. Let's... ban gay marriage. Let's profile to prevent terror. Let's deport all illegal aliens. Let's ban Communism. Let's ban Islam. Let's ban the Victory Mosque at Ground Zero. Whatever anyone claims about the constitutionality of doing so, who cares? The Constitution is irrelevant ever since we admitted as much by allowing Obama to flaunt it.

Do understand... when one side makes something so, then the other side will use that new normal to their advantage.

So... if it's a new normal to ignore the Constitution... well, you can imagine the danger of that, right?

The examples above, they're hypothetical, but I used them to impact yourself, an apparent leftist. You'll laugh, of course, believing, "No way... oh, man, you got such an imagination... that'd never happen!".

So... does the Constitution matter... or does it not?

Remember... if it doesn't matter in just ONE instance, then it doesn't have to matter EVER.

So... to pretend Obama's exempt from the Constitution is DANGEROUS.

And... rather than attack Sarah Palin on no basis at all, why not discuss the merits of policies with her?

Why doesn't the Left and the Liberal Media do that, instead of simply spreading rumors, lies, hate and even inciting violence against her?

So... the Left/Liberal Media are hypocritical to say, forget about Obama's Constitutional eligibility to be President and discuss his policies instead.

Of course, when we do dis his policies and propose alternatives, we get branded such things as "racist", "hateful", etc... So...

Not sure if you'd understand, but we on the "Right" know what we're doing.

We will NOT "play nice", so long as the other guys NEVER "play nice".

If we lay down arms, the other guys will definitely destroy us.

We fight for liberty.

We fight for freedom, democracy, the rule of law and human rights. And the Constitution. And our country.

Get used to it!

Whether you agree with it or not, being a US born citizen is a requirement for the post, if he is born there, get the issue sorted out and everyone can move on. If not they will get caught out eventually and any shred of integrity that the Democratic party has will be gone and it will haunt them for years.