"Terrorist Act" at Georgia Tech: Bombs Found in Courtyard... Plus Even More 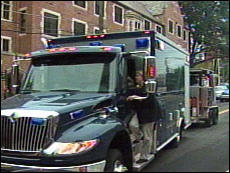 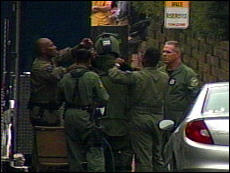 Photos from WXIA-TV Atlanta.
From Michelle Malkin and Little Green Footballs, via Newsbeat1, plus a report from News 11Alive:

On the heels of the attempted terrorist bombing outside the football stadium at Norman, Oklahoma, comes this:

This morning in Atlanta, Georgia, three explosive devices were found between two dormitory buildings on the campus of Georgia Tech University. An Atlanta police official told News 11Alive that it was a "terrorist act".

One of the devices exploded, injuring the custodian who found them inside a plastic bag. Two others were detonated by a bomb squad.

"It is a terrorist act at this point and depending on the outcome of the investigation it potentially could become a federal violation as well," said Major C.W. Moss of the Atlanta Police Department.

...The explosives were made up of chemicals placed inside plastic bottles and could have seriously injured someone, officials said....

This information coincides with information from the Northeast Intelligence Network in which it is reported that similar plastic bottles filled with unidentified substance were seized from the vehicle belonging to Norman, Oklahoma suicide bomber Joel Henry Hinrichs.

Michelle Malkin also directs us to this, another report of a finding of an explosive device in public...

Apparently, the apparent terror-oriented explosives-related incidents of the past several days, coupled with the well-reported-by-the-mainstream media NYC Subway terror alert, are reasonable cause for concern that there could be further terror-related incidents.

Therefore, The Canadian Sentinel recommends all of us keep our eyes open for suspicious items, persons and activities and not be afraid to report them to police and other authorities. It's possible that threat awareness and vigilance will someday save countless lives. Better safe than sorry.

Posted by Canadian Sentinel at 9:13 PM