That's how bad Obama has been for the Democratic Party.

The divisions, though well-covered-up, are deep and seething and threaten to go nuclear at any time without warning.

Make no mistake- the Clintons are infamously unscrupulous wily schemers and will stop at nothing to get what they want. Just watch them. 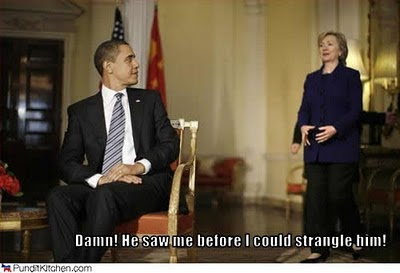 Mark my words: They will screw Obama.

If I were to make a partisan smear attack like Democrats do, I'd suggest that they're mad at Obama's nomination and resultant presidency for reasons of race. Who knows? After all, there's no question, given the history and the current evidence, that the Democratic Party is seething with racially based animosity, notwithstanding the "inclusive" act they put on for political optics.

Besides, as there's little difference between Hillary's and Obama's neo-communist, dhimmi, anti-American, anti-Christian, anti-Semitic, anti-Israel policies and agenda, so what else is there to explain the animosity? 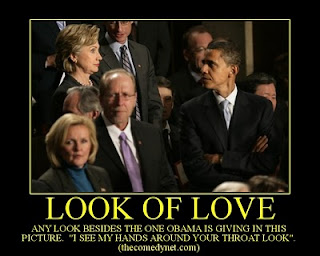 Posted by Canadian Sentinel at 7:44 AM

That whole White House is in a mess both parties are to blame for the outcome. And for that, they will pay dearly for it only a handful of good guys are left the others are thrown into garbage.

The country was not founded nor built on Communism, socialism nor on terror.

God has been replaced- no wonder the country is in a disaster.
Return God to His Rightful place will bring peace and stability. Ignore Him and you are on your own.