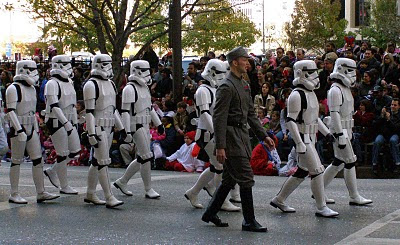 
A bill introduced in the House of Representatives by Rep. Charles Rangel, D-N.Y., would reinstate a compulsory military draft during war time and require U.S. citizens not selected for military duty to perform a "national service obligation" – as defined by President Obama – for a minimum of two years.

Rangel introduced the Universal National Service Act, or H.R. 5741 on July 15. The measure was referred to the House Armed Services' Subcommittee on Military Personnel on July 23.

Toldya so! Voila the hidden agenda.
What does one expect from the super-corrupt, unethical, race-baiting Charlie Rangel?

We'll see. But it's doubtful it'll happen in 2010, given the Midterms.

If Obama were re-elected, he'd definitely try to do this. It's part of his extreme ideology.
There's no shortage of crazy-ass, extreme, revolutionary Democrats, apparently. They're like a can of mixed nuts and dried fruits.


Remember in November this year and November 2012.
Posted by Canadian Sentinel at 7:14 AM