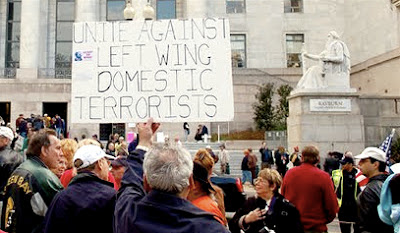 
Could they be the next Bill Ayers-Bernardine Dohrn left-wing domestic terrorist duo?

The privileged daughter of a prominent city doctor, and her boyfriend — a Harvard grad and Occupy Wall Street activist — have been busted for allegedly having a cache of weapons and a bombmaking explosive in their Greenwich Village apartment.

Morgan Gliedman — who is nine-months pregnant — and her baby daddy, Aaron Greene, 31, also had instructions on making bombs, including a stack of papers with a cover sheet titled, “The Terrorist Encyclopedia,’’ sources told The Post yesterday.

People who know Greene say his political views are “extreme,” the sources said.


Posted by Canadian Sentinel at 2:25 PM No comments: Links to this post

Like I Said, The 'Science' Is NOT 'Settled' Re 'Global Warming', Etc

Even the scientific sides have made dubious claims, though. In AR2, prominent skeptics who had initially been invited to contribute found their work dropped without notice at the last minute. A "hockey-stick" temperature graph - showing centuries of stable temperatures followed by a sharp upward spike during the industrial age - featured prominently in several places in AR3, even though the data it was based on was highly dubious.

And the scientific sections of AR4 were rife with errors, from unverified claims about disappearing Himalayan glaciers to a sensationalized report on rainforest devastation done by an eco-activist and a freelance journalist.

The point is, UN climate change agencies have always been far more about the politics of global warming and far less about the science. The science typically only figures when it suits the political ends of alarmist scientists and UN bureaucrats.

So skeptics should not hope the latest revelations will stop the constant drumbeat of environmental alarmism emanating from national capitals, enviro lobbies, ivory towers and the IPCC. If this is mostly a political exercise, scientific data will be powerless to derail it.


Indeed.  It's really about POLITICS.  It IS a left-right thing.  Whyy are people letting themselves be manipulated with such bullshit politics and propaganda?  Remember, ALL professions are chock full of corrupt, greedy, unethical, amoral folks for whom money and social status with rich, cool, pretentious elite groups are more important than truth and professional/scientific integrity.

I also noticed that folks like top propagandist Al Gore and so-called "scientist" (propagandist and money-hungry leftist) David Suzuki get pissy and hissy when asked inconvenient questions about the science of what they're talking about.  Funny, that.  They have zero confidence in what they tell us, otherwise they'd be able to answer satisfactorily without batting an eyelash, rather than pretending to get angry to fool the questioners into believing that they're being rude/annoying and better go away or else.  Sheesh.  They're just like Obama on that.  He won't take serious, inconvenient questions, either... he's all rehearsed and teleprompted, and nothing outside the script is allowed to bother him and throw him off his concentration on looking like a latter-day, uber-cool Xerxes or something.

Relax.  The environment is ok, really.  It takes care of itself naturally, over time.  It has, so far, and continues to do so.  No one has proven otherwise, though they love, for political reasons, to claim they have.

By the way, it's coooooold and there's tons and tons of snow everywhere where I'm at.
Global warming?  Wish it was here.  In the winter, anyway... ha-ha! 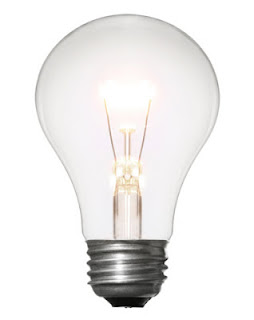 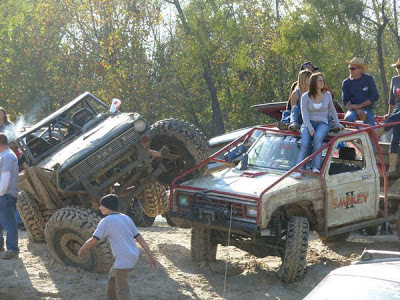 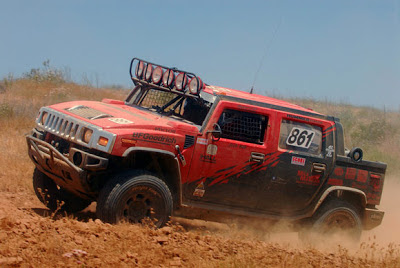 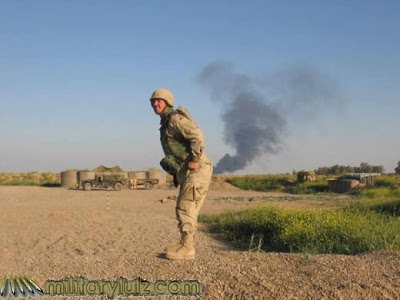 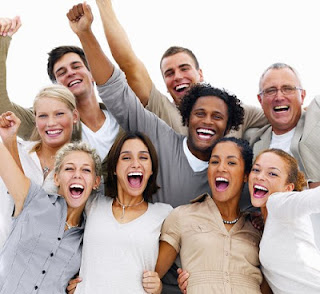 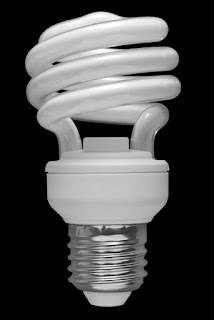 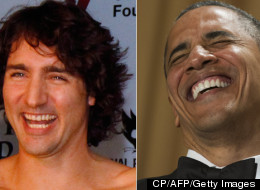 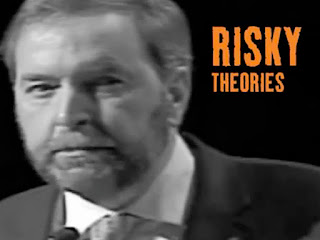 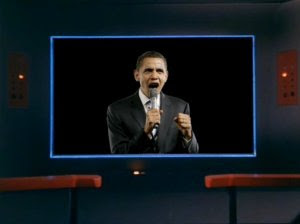 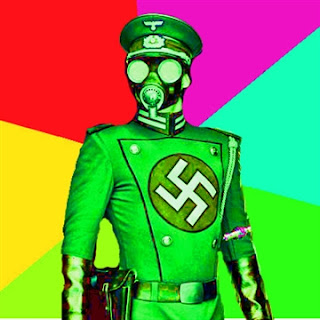 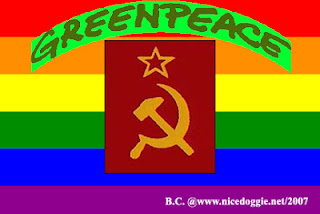 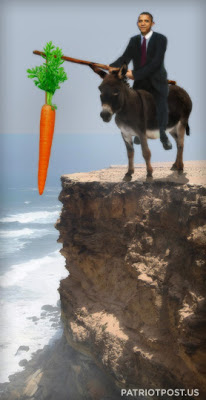 Posted by Canadian Sentinel at 4:39 AM No comments: Links to this post 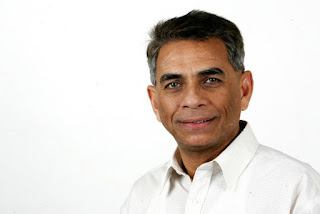 Dr. Salim Mansur is my kind of "Muslim".  He's nothing like most Muslims, as far as I'm concerned.  If there's lots more Muslims like Dr. Mansur, they better start saying the same stuff he says, and advocate for action to crack down on the propagation of the hatred and incitement of the violence, as promoted by the Koran, and cleanse their community of the "extremist" element... or be suspect of a hidden agenda by most non-Muslims.  Action being the key word... simply denouncing "all extremism in all ideologies/groups" is worthless.  Until action is taken by "good" Muslims (rather than the arrogance and equating of Islam's problem's exclusive magnitude to that of all faiths), they shall continue to be suspect.

Because he understands what's what.  He is an expert on what's going on.  He knows.

"Their values, ideologies, politics and culture is completely incompatible with the values of Canada as a liberal democracy."

I suppose "progressive" dummies want to call Dr. Mansur "hateful", "racist" and "Islamophobe" now.  Go ahead.  But you'll have to make your case in the court of public opinion.

Speaking of the court of public opinion, I noticed the following poll result over at SUN News the other day:

Posted by Canadian Sentinel at 4:44 AM 3 comments: Links to this post

Yes, it's difficult, given the perceptual and reactive, irrationality-promoting conditioning we've received via external sources, to believe that checks and balances mechanisms and agencies and such could be partly or wholly compromised and made worthless. But, seriously, we know it's POSSIBLE... and to acknowledge this is our start to becoming independent thinkers and analyzers of evidence and patterns of behavior of various players, patterns which, over time, suggest to us what the truth really is, no matter the media/authorities narrative.

Fact: The late Nikita Khruschev, leader of the Evil Empire Soviet Union, is on record as declaring his regime's plot to, over the long term, subvert and corrupt the United States of America internally, while directed from his regime. And it's documented that communist Americans have been doggedly acting to corrupt and subvert the institutions that made America strong and great in the first place. Over decades, everything came under attack by these stealthy subversive folks. They all toe an ideological, agenda and propaganda line.

Khruschev did say that the plot was to give Americans little, increasing, progressive doses of socialism, which would meet with conveniently little resistance, until one day they awoke to the realization that, WTF, they were living under a communist regime.

And now there is a communist in the White House, and he's being as subversive as possible as quickly as possible. Millions are awake to this indubitable, blatantly evident reality. Those who don't see this reality are submitting to the "mainstream" media's consent-manufacturing for the communist agenda. They're lazy-minded. Some are just stupid, usually by choice. Some just don't care at all. But millions of people DO care, and DO look for evidence, and DO analyze it all independently to arrive at independent, valid, evidence, logic, reason based deductive conclusions. Like millions of amateur Sherlock Holmses and Columbos.

This is what's happening, folks, in a general nutshell.
Posted by Canadian Sentinel at 5:03 AM No comments: Links to this post 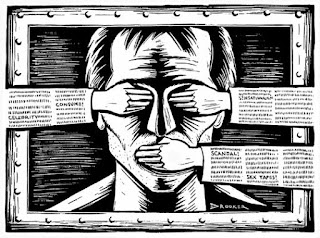 The Press is not free when the reporters are employed and paid to follow orders and directives as to what they can and cannot tell "news" consumers.

This is how the corporate "mainstream" media has so easily become not-free (the Constitution says that there CAN be a "free press", but doesn't forbid a non-free press... duh).

Simply, really, reporters are hired according to ideology and willing submission to being controlled as to what they'll say and not say to us. Effectively they're propagandists masquerading as "journalists". False advertising, pretty much, claiming to be scrupulous, honest and trustworthy, while really not being so.

The truly free press does, however, exist. Example: Once upon a time FOX News was basically truly free (though it's become less and less so as it came under the control of those with an agenda to impart a specific narrative and ideology, to censor inconvenient questions and evidence, etc). But we still have the NEW MEDIA, which is as free as its owners/directors want it to be. How free the various NEW MEDIA entities are depends on those in control of them. We can judge for ourselves by patronizing them all over time and seeing whether they're truly free or too submissive to intimidation by forces who don't want them to tell us truthful stuff or show us real evidence some forces find very inconvenient.
Posted by Canadian Sentinel at 4:59 AM 1 comment: Links to this post

The Sentinel will be back...
Posted by Canadian Sentinel at 4:24 PM No comments: Links to this post