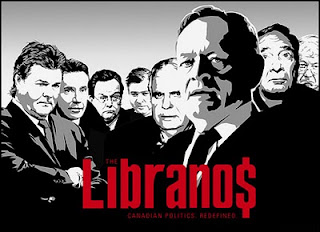 So the Librano Liberal Media wants to holler and trumpet at us every day this campaign about crooked people in political parties?
Well, hey... remember those guys in the picture above?  Remember ADSCAM?  'Nuff said!


"We have people in the Liberal campaign headquarters who've had run-ins with the law before, and they do their time and pay the price, and they come back," she said. Challenged by her fellow panelists to name names, she would not.

"The media are driving this," she said of the Carson issue.

"If people start opening up all of these cans of worms and trying to run with that, then you're going to get your own hands dirty," Wallin said. 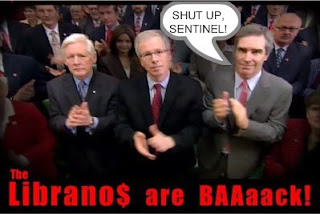 "Everybody's got skeletons in the closet. There are legitimate questions about other people in other campaigns, and interestingly enough, those stories are not being told."

Of course not.  After all, the Librano Liberal Media wants to bash the Conservatives while protecting and exalting the Librano$ Liberals.
Posted by Canadian Sentinel at 6:28 AM

Normally, CS, "They Did It Too" stops being a viable defense around the age of six. :)

What media? They all sing the same song what one media sees PEI the other media all the way in a remote part in OTTAWA sees the same. But when good news hits canada all medias don't see.

The story that CS is quoting, criticizing the Liberals, is from CBC.

But don't let a little reality get in way. :)

Sentinel, I get theidea you really don't like liberals. So here is a quote that's up your alley.

A liberal is someone who feels a great debt to his fellow man, which debt he proposes to pay off with your money.
-G Gordon Liddy

Here's another great quote from Liddy:

"The Fuhrer was G Gordon Liddy's first political hero. Liddy was a sickly, asthmatic child when he grew up in Hoboken, New Jersey, in the 1930s. The town was full of ethnic Germans who idolized Hitler. Liddy was made to salute the Stars and Stripes Nazi-style by the nuns at his school; even now, he admits, "at assemblies where the national anthem is played, I must suppress the urge to snap out my right arm." His beloved German nanny taught him that Hitler had - through sheer will-power - "dragged Germany from weakness to strength."

This gave Liddy hope "for the first time in my life" that he too could overcome weakness. When he listened to Hitler on the radio, it "made me feel a strength inside I had never known before," he explains. "Hitler's sheer animal confidence and power of will [entranced me]. He sent an electric current through my body."
http://www.independent.co.uk/news/people/profiles/g-gordon-liddy-voice-of-unreason-534135.html