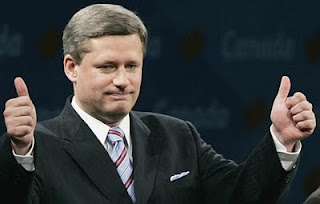 Conservative Prime Minister Stephen Harper has done an excellent job of steering Canada through and out of the global recession.

Canada is now leading the industrialized world in economic growth.

Much of that growth has come from the resources sector in Western Canada and continued strength in the housing market in most parts of the country.

That brings me to the Liberals of Ignatieff.  They want to kill the Western Canadian economic engine by strangling the life out of the oilpatch.  That would kill the recovery, and we know the ramifications of that, which would be devastating. 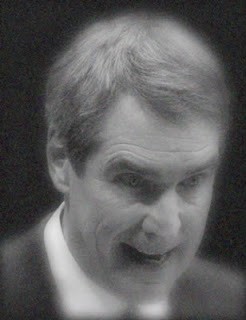 Liberal Leader Michael Ignatieff:
Hellbent on imposing socialism and destroying Canada's economy with a Seventies'-style tax-and-spend program the likes of which we haven't seen since the neo-communist Pierre Trudeau.
So don't "fix" what's already working very well.  The economy is working extremely well, ain't broke, so only a lunatic would come in and screw with that!  Then again, Liberals are lunatics!
Posted by Canadian Sentinel at 5:46 AM

Yes, it's a good thing Mr. Harper had the intelligence not to dismantle the banking system and legislation bequeathed by Prime Minister Martin. It's a shame they've completely blown the Martin-era balanced budget, but at least with a minority there's a limit to the damage they can do.

I voted for the Cons in the last two elections as I came to despised the Liberals for that corruption scandal in Quebec. However I certainly long for their surpluses as it made me all warm and fuzzy being one who believes living within ones means. However who can say the Liberals would not have run up large deficits as well if they were in power during that economic speed bump.
And regarding the banking system, I was totally against allowing longer term mortgages and lower down payments the Cons brought in, at least they backtracked on that.

I will vote Conservative again but only because I believe they are the lesser of the evils. However our local NDP MP is a shoo in. I may as well stay home but I will take my spouse and my 94 year old life long Conservative mother to vote anyway.

There's ONE riding in Canada where I might vote Conservative, if I still lived there - Nunavut, where Leona Aglukkaq is running. Smart, smart lady, best candidate in the riding, not afraid to speak her mind in caucus. Conservative in the best sense - cautious, sensible.

As it stands, I'm in Pierre Polievre's riding - the idiot who marked the federal apology for residential school abuse by going on talk radio and dismissing natives as lazy. I wonder how he managed to look Leona in the eye the day after that little debacle.

Ah, so Piere and Andre Forbes are two of a kind, they transend mere political lines.

"so Piere and Andre Forbes are two of a kind"

Indeed. The difference, of course, being that Ignatieff booted Forbes out as soon as his remarks were made public.