The hate isn't coming from the side of those who oppose the Islamic Killing Field Mosque project.

It's coming from those who favor it!

Imam Rauf would look perfectly natural wearing an eagle-n-swastika emblazoned fez and one of those Islamic-Nazi SS uniforms.  Or perhaps just dressed like Hitler's Islamic comrade. 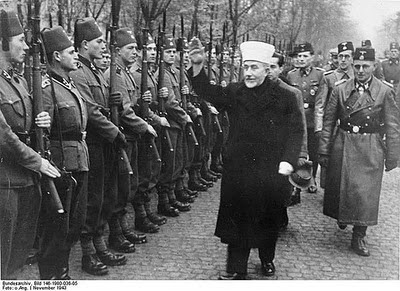 Isn't it eerie how Imam Faisal Rauf bears a striking resemblance to Hitler's Islamic comrade & uncle to Yasser Arafat, Haj Amin al-Husseini?
I bet al-Husseini would've built another Cordoba at Auschwitz, if the Nazis had won, to symbolize another Islamic conquest.  After all, the Muslim Nazi himself designed the Auschwitz blueprints.
Posted by Canadian Sentinel at 4:56 AM

I think the deranged scumbagger attacking the Holocaust survivor might very well be a professional hater. There's something about him that's just not right. It's as if it's his JOB to act like that, and he knows his boss is watching, and he's doing his best.

Nevertheless, whether he's doing it all of his own volition or is a professional hatemonger, the reality is that he's an extreme piece of shit who really ought to be charged with a hate crime.

After all, if someone had behaved like this towards an abortionist, a homosexual activist or an Islamist, then rest assured that strings would be pulled to punish the person doing the abusing. That's how it works. The system is the Hard Left's weapon. Of course, when someone the Hard Left hates is the victim, the abuser almost always gets off.

Case in point: The New Black Panther racist thugs who intimidated and slurred white voters at the polling station in '08. The case was a foregone conclusion, a slam-dunk and already won by the prosecution, yet the Obama-Holder "Justice" Department... it interfered to make sure that the racists went completely free.

The Piece of Shit reminds me of Jack Nicholson in "The Shining".

Remember the ANTI-TERRORIST ACT BILL? the Opposition couldn't be bothered standing firm with the conservatives for the safety of our country against terrorists.

The same for the opposition leaders showing support for the TALIBAN, AL-QAEDA, HEZBOLLAH, TAMIL-LTTE-TIGERS and HAMAS.

And the best part-the national media support them as well.
So, when you have the opposition parties speaking out, rallying behind terrorist flag and so on- it sends them a clear message that the OP approve of terrorists.

It's also possible that the silence is only temporary. They might be strategizing and developing talking points and attack strategies to make the Conservatives somehow look bad for doing the right thing. As usual.

I was watching the Holocaust survivor video earlier in the day and could feel my fists clenching. If you bleeped out the curses, that screaming moron would be stuck for words. I hope the video goes viral and the idiot lives with the consequences of his stupidity and big mouth for many years to come.

It's making the rounds on FaceBook and has been linked to at SDA.

That's a totally hateful lefty. I wish someone had punched the daylights out of that shit.